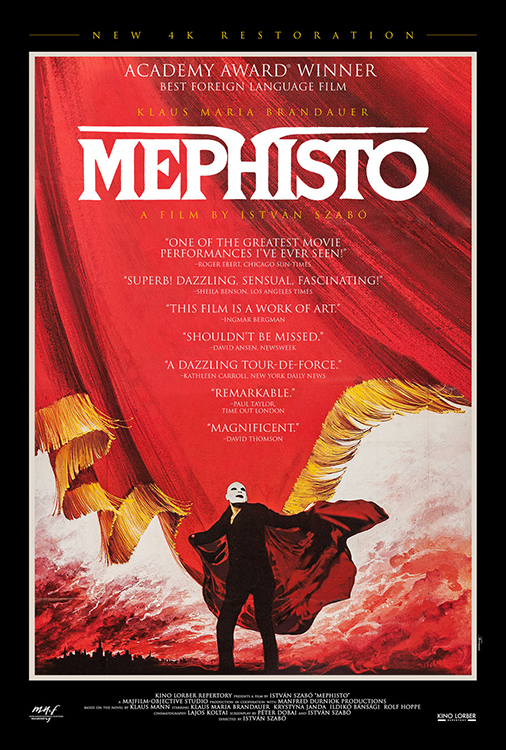 The 1981 Academy Award-winning Best Foreign Language Film MEPHISTO, by Hungarian master István Szabó, concerns a passionate but struggling actor (Klaus Maria Brandauer) who remains in Germany during the Nazi regime and reaps the rewards of this Faustian pact by finally achieving the stardom he has long craved. Sparkling new 4K restoration by the Hungarian Film Fund.

"There has been precious little incisive appraisal of the precise seductive allure of fascism, and certainly none to match that offered by Szabó's remarkable film."
- Paul Taylor, Time Out (London)
"This film is a work of art. The film transmits its messages so forcefully that no one can remain unaffected."
- Ingmar Bergman
"One of the greatest movie performances I've ever seen. A performance of electrifying power."
- Roger Ebert, Chicago Sun-Times
"Magnificent and distinguished. It's more than a mercy, it's a coup."
- David Thomson
"Few have dared what Brandauer accomplishes: showing us a good actor responding to the same neurotic drive for the center of the stage, the immortalizing role. His is a great performance, nothing less."
- Richard Schickel, TIME Magazine
"Mephisto is brilliant metaphorical filmmaking."
- Bruce McCabe, Boston Globe
"Possesses an inner momentum and the film as a whole, with its dynamic leading performance, has an energy reminiscent of the films of Andrzej Wajda."
- David Shipman
"A chillingly real experience."
- Joshua A. Guttman, The Knockturnal
"Mephisto excels at depicting the boiling-frog manner in which complacency allows extremism to take hold."
- Jake Cole, Spectrum Culture
"Director István Szabó navigates a swooning historical landscape that threatens to consume his central figure, who turns in one of the great screen performances of all time. Brandauer embodies the tortured artist through a wildly vivid range that careens from hammy, operatic full-body gestures to the most subtle changes of expression at eyeball-level."
- Pat Padua, Washington City Paper
Cast