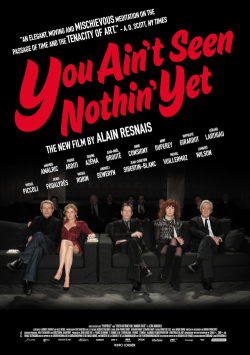 You Ain't Seen Nothin' Yet

Based on two works by the playwright Jean Anouilh, YOU AIN'T SEEN NOTHIN' YET opens with a who's-who of French acting royalty (including Mathieu Amalric, Michel Piccoli and frequent Resnais muse Sabine Azema) being summoned to the reading of a late playwright's last will and testament.

There, the playwright (Denis Podalydes) appears on a TV screen from beyond the grave and asks his erstwhile collaborators to evaluate a recording of an experimental theater company performing his Eurydice--a play they themselves all appeared in over the years. But as the video unspools, instead of watching passively, these seasoned thespians begin acting out the text alongside their youthful avatars, looking back into the past rather like mythic Orpheus himself.

Gorgeously shot by cinematographer Eric Gautier on stylized sets that recall the French poetic realism of the 1930s, YOU AIN'T SEEN NOTHIN' YET is an alternately wry and wistful valentine to actors and the art of performance from a director long fascinated by the intersection of life, theater and cinema.

"An elegant, moving and mischievous meditation on the passage of time and the tenacity of art." - A.O. Scott, The New York Times