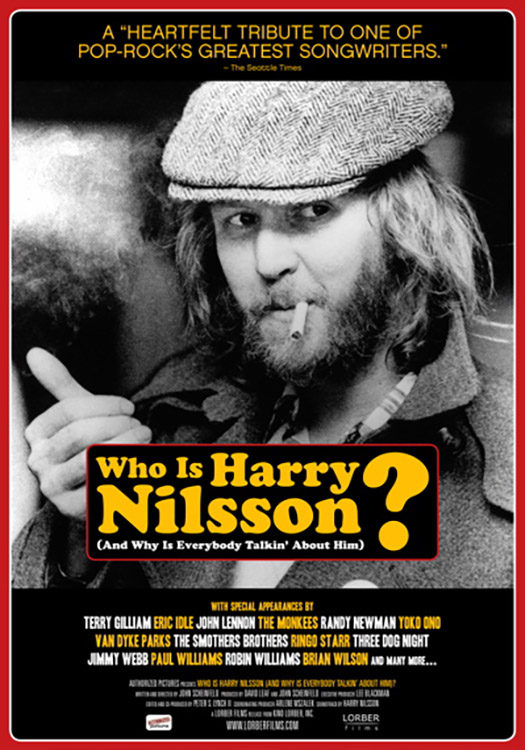 Who is Harry Nilsson? (And Why is Everybody Talkin' About Him)

WHO IS HARRY NILSSON?, a wildly entertaining, star-studded documentary tells the story of one of the most talented and versatile singer-songwriters in pop music history and the man The Beatles dubbed their favorite American musician. The Grammy Award-winners "Everybody's Talkin" and "Without You", the quirky "Coconut" ("Put de lime in de coconut, the whimsical "Me And My Arrow," and the poignant "One" (is the loneliest number"), these recordings are all the work of Harry Nilsson.

The documentary, which Ain't It Cool News said, is "everything a great documentary needs to be," reveals his spirited relationship with John Lennon and close bond with Ringo Starr, as well as Harry the legendary "bad boy" party animal who was at the same time a devoted husband and father. Director John Scheinfeld brings added emotion and intimacy to the story with over 50 Nilsson recordings, rare or never-before-seen film clips, home movies and personal photos. To this are added compelling interviews with top music and movie personalities who knew Harry well. They include Micky Dolenz, Terry Gilliam, Eric Idle, Al Kooper, Randy Newman, Yoko Ono, Van Dyke Parks, The Smothers Brothers, Jimmy Webb, Paul Williams, Robin Williams, Brian Wilson and many others. As film critic Leonard Maltin noted, "WHO IS HARRY NILSSON? is a vivid portrait of a gifted man and a great reminder of his talent."