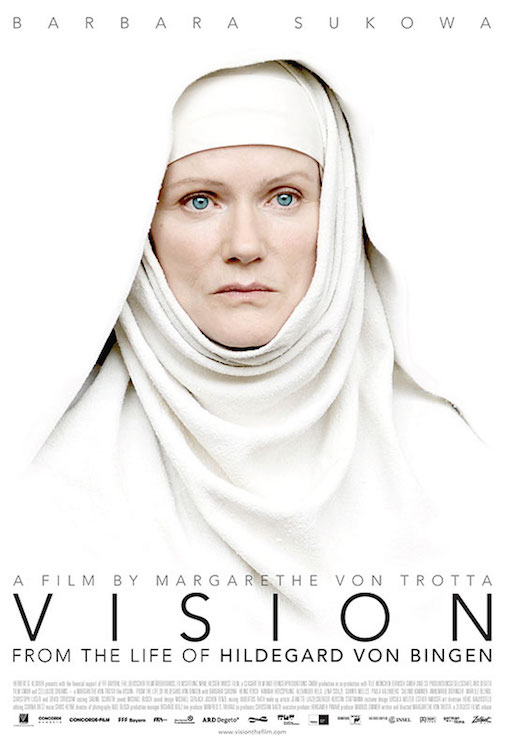 Vision - from the Life of Hildegard von Bingen

Hildegard von Bingen was truly a woman ahead of her time. A visionary in every sense of the word, this famed 12th-century Benedictine nun was a Christian mystic, composer, philosopher, playwright, poet, naturalist, scientist, physician, herbalist and ecological activist.

In VISION - FROM THE LIFE of HILDEGARD VON BINGEN, New German Cinema auteur Margarethe von Trotta (Marianne and Juliane, Rosa Luxemburg, Rosenstrasse) reunites with recurrent star Barbara Sukowa (Zentropa, Berlin Alexanderplatz) to bring the story of this extraordinary woman to life. In a staggering performance, Sukowa portrays von Bingen’s fierce determination to expand the responsibilities of women within the order, even as she fends off outrage from some in the Church over the visions she claims to receive from God. Lushly shot in the original medieval cloisters of the fairytale-like German countryside,Vision is a profoundly inspirational portrait of a woman who has emerged from the shadows of history as a forward-thinking and iconoclastic pioneer of faith, change and enlightenment.

A memorable, beautiful film! ...The look of the film is extraordinary. Shot in widescreen format, but set almost exclusively inside the two monasteries where the story unfolds, the film possesses a natural visual tension created by its intimacy and broad scope. The compositions of cinematographer Axel Block suggest Jan van Eyck, his lighting Vermeer.

In VISION, von Trotta achieves a non-preachy coolness that suggests wisdom. Her politics are clear, but they submerge in fascination for von Bingen’s rule-breaking, pioneering faithfulness.

Barbara Sukowa, the radiant actress who portrays Hildegard as a mixture of canny politician and fervent mystic who claims to receive messages directly from God, makes Hildegard a likeable and charismatic woman who risks a great deal to do good in an environment that leaves women little room for self-expression. Her intelligence and enthusiasm make her a proto-feminist force to be reckoned with.

CRITICS’ PICK! Dares to portray the spiritual life as something worth aspiring to, even as it makes a case for the revolutionary achievements of its remarkable subject.

As depicted in VISION, Hildegard was creative, passionate, fierce, dogged, manipulative, holy, learned, loyal—and obedient to her ideal of faith. She supported education and independence for women at a time when most women had neither. Being female, the story of Hildegard shows, often means fighting for parity against men in charge.

Transporting. Casts convent life as a kind of fever dream. Von Trotta’s canvas of medieval faith impresses in its detail.

Fans of medieval multi-hypenate Hildegard von Bingen can at last burst into plainsong: Margarethe von Trotta herself has brought the abbess’s remarkable life and times to the screen. Von Trotta is crafting something more complex and layered than the life of a saint.

Soul-stirring and daring. Admirably carried by the immensely gifted actress Barbara Sukowa in the role of Hildegard.

The film exalts in the diverse accomplishments of the 12th century Benedictine nun. Sukowa embodies her character’s imposition of will with complete conviction, just as she does Hildegard’s imposing intellect and bottomless devotion.

A great performance at once tender and mystic.... Margarethe von Trotta’s film...seems to be exploring the nuances of love on this earth.

October is bursting with great movies, but the most mesmerizing might just be VISION, a haunting biodrama based on the life of Hildegard von Bingen, a 12th century nun... The movie is dark, fascinating and a reminder of the deep roots of religious women’s tough and ongoing power struggle.

A timeless, powerful film... Takes you into a world seldom seen or heard, with piercing intelligence, and a wonderful central performance by Barbara Sukowa. The audience gets to experience what it means to lose oneself in faith, from a female point of view, struggling against the hierarchy of the church. The sparse sound scape and delicate performances draw you into a world long ago, before the cacophony of modernity, and remind you that there’s still silence in the world to embrace.