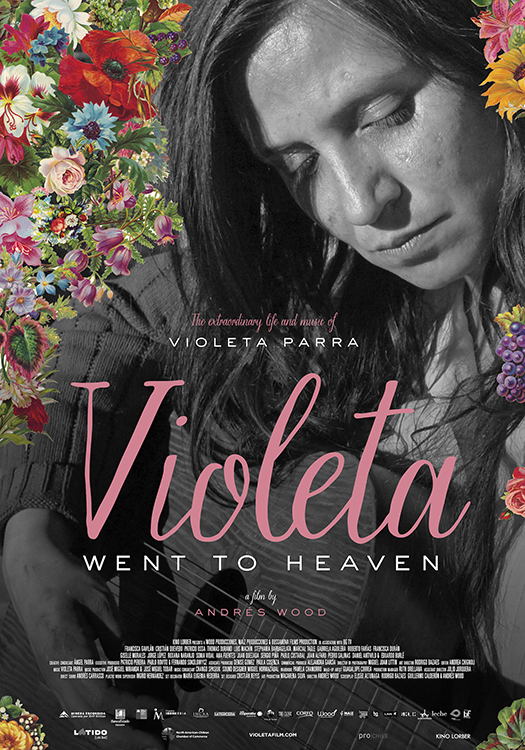 VIOLETA WENT TO HEAVEN tells the story of famed Chilean singer and folklorist Violeta Parra, tracing her evolution from impoverished child to international sensation and Chile's national hero, while capturing the swirling intensity of her inner contradictions, fallibilities, and passions.

From the marquee that she built in Santiago, Chile, Violeta Parra is visited by people who shaped her life. We gradually find out her secrets, fears, frustrations and joys, not only through performances of her multiple works but also through her memories, her loves, and her hopes. Her achievements are suspended in a passionate journey with the characters who made her dream, laugh and cry.

"Write as you like, use the rhythms that come out, try different instruments, sit at the piano, destroy the metric, shout instead of singing, blow your guitar and ring the horn. Hate mathematics, and love eddies. Creation is a bird without a flight plan, that will never fly in a straight line" - Violeta Parra

"...unfolds as a poetic sine wave of celebration and defeat." - The New York Times

"the movie is blessed with star Francisca Gavilan, whose grave, driven Violeta is convincingly four-dimensional, thrumming with maternal-feminist power yet plagued by self-loathing and depression. (She also sings Parra's songs, with scorching full-throatedness.) A rare Chilean film that doesn't mention either the Allende or Pinochet regimes, Violeta Went to Heaven is a love letter to a lost 20th-century goddess. It's hard to resist her." - Time Out New York

"Gavilan's performance bears out Parra's advice to "hate mathematics and embrace chaos," and falls between private and public, assurance and self-doubt. It's no surprise that Violeta Went to Heaven was Chile's Oscar submission..." - AV Club