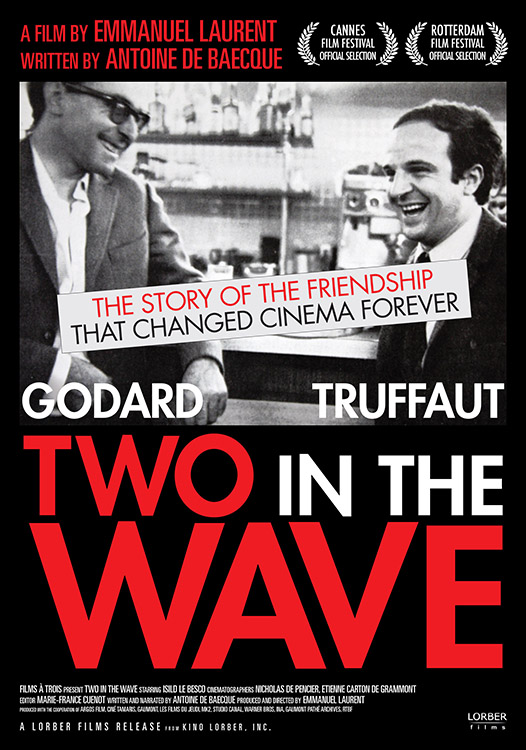 Two in the Wave

Directors Jean-Luc Godard and Francois Truffaut changed the face of cinema forever as members of the French New Wave. They also happened to be best friends. TWO IN THE WAVE documents their intensely combative and creative relationship during their time at Cahiers du Cinéma, their triumphant work on The 400 Blows and Breathless, and their dramatic falling out following the worker and student strikes of May 1968. It also presents the unique bond both filmmakers shared with the actor Jean-Pierre Leaud, who started his career as a child and grew up with Godard and Truffaut as brilliantly bickering father figures. Written and narrated by former Cahiers editor Antoine de Baecque, it is a meticulously researched examination of this vibrant and turbulent period in film history. With clips from over 30 films, and rare interviews with Godard and Truffaut throughout their careers, TWO IN THE WAVE is an essential and often revelatory look at the life and work of two of cinema’s inimitable masters.

"A present-tense essay that is both time capsule and collage... a powerful reminder of just how exciting that work remains." - A.O. Scott, THE NEW YORK TIMES

"Elegant and revealing...TWO IN THE WAVE shows you how these two spiky, driven figures changed the face of cinema." - Owen Gleiberman, ENTERTAINMENT WEEKLY

"Buffs interested in the filmmakers and the era will be delighted by wonderful early footage of the budding young auteurs." - Variety

"Brisk and fertile - helps to transmute the New Wave from contemporary explosion into a historical event." - The New Republic