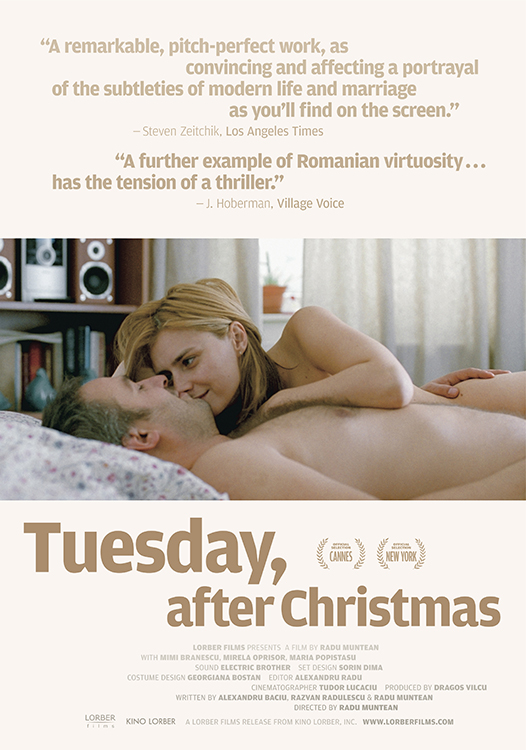 One of the central figures to emerge from the cinema of the Romanian New Wave, director Radu Muntean has created in TUESDAY, AFTER CHRISTMAS a tense, emotionally resonant drama about a middle-aged man caught between his commitment to his family and his affair with a younger woman. Paul and Adriana (played by Mimi Branescu and Mirela Oprisor, who also happen to be a couple in real life) are the happily married couple whose ten-year marriage is rocked when Paul falls into an illicit affair with his daughter’s sexy dentist. Through beautifully calibrated performances and scorchingly intense long takes, the drama unfolds as Paul is forced to choose between the easy rapport and stability of his family life and the uncertainty and excitement of a relationship with a much younger woman.

"With brilliant acting and hypnotic takes, Tuesday, After Christmas is a new film by a hugely talented director." - Andrew O'Hehir, Salon

"The latest bloom from the flourishing garden that is Romanian cinema, Radu Muntean's Tuesday, After Christmas chronicles the emotional fallout from a classic love triangle, but it unfolds with the agonizing tension of a suspense film." - Scott Tobias, NPR

"The strength of Tuesday, After Christmas,...lies in its rigorous, artful and humane fidelity to quotidian circumstance." - A.O. Scott, The New York Times

"Director Radu Muntean has pulled off the near-impossible, turning each scene...into arias of generosity for his actors." - Joshua Rothkopf, Time Out New York

"A remarkable, pitch-perfect work, as convincing and affecting a portrayal of the subtleties of modern life and marriage as you'll find on the screen." - Steven Zeitchik, The Los Angeles Times