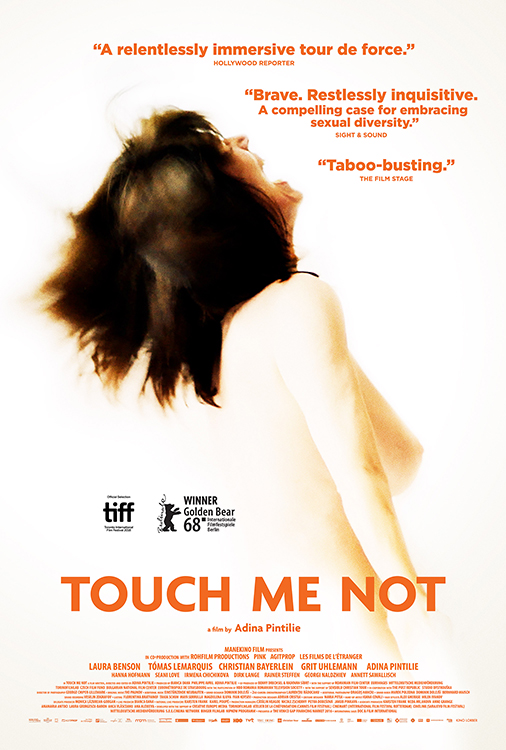 Filmmaker Adina Pintilie’s Golden Bear–winning first feature is a brave and raw look at bodies, intimacy, and empathy, exploring the private lives and sexual desires of four people with an approach that blurs the line between fiction and documentary.

In what feels like galaxies beyond the sexual revolution of the 1960s, TOUCH ME NOT invites us to start as a tabula rasa and transcend all previously imagined limits. To call the film body positive and brave would be an understatement: it is a tour de force, a supernova of identity. Within protective spaces that are entirely free of judgment, Adina Pintilie and her protagonists explore new perspectives on human relationships, and we, as viewers, are challenged to question our own self-knowledge and continue our journey of self-discovery beyond the cinema in our everyday lives.

A shattering exploration of the fine line between fiction and reality, Pintilie’s feature debut is a studied, elaborate, and unsettlingly daring dialogue with the inner self. Winner of the Berlinale Golden Bear and Best First Feature, TOUCH ME NOT is, for those brave enough to engage with desire, an exhilarating plunge into the endless possibilities of the human body and mind. – Dimitri Eipides, Toronto International Film Festival

“A relentlessly immersive tour de force. An eye-opening look at human sexuality. Striking for its intelligence, self-assurance and originality. Thought-provoking and possibly therapeutic.”