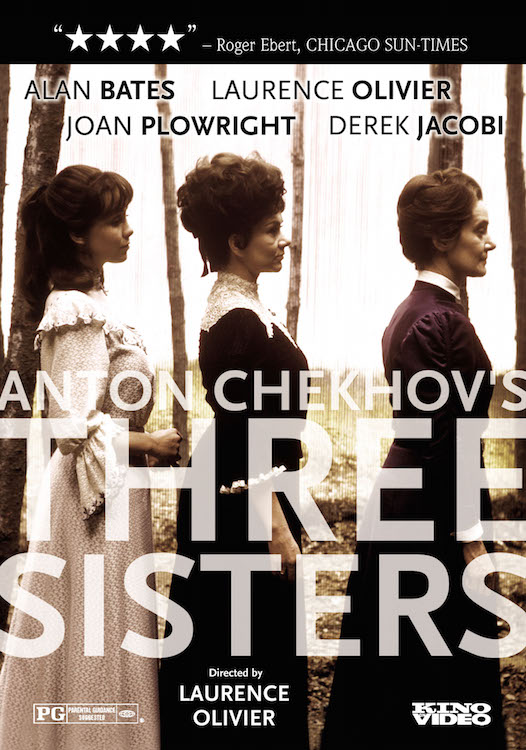 Nearly a thousand miles away from their beloved Moscow, Chekhov's Three Sisters live in virtual exile. Olga (Jeanne Watts), a schoolmistress, attempts to support her siblings and the home that is the sole legacy of their late army officer father. Masha (Joan Plowright) finds relief from her empty marriage in an affair with a passionate young colonel, played by Alan Bates (Gosford Park, The Cherry Orchard, In Celebration). Irina (Louise Pernell), the youngest, wills herself to return the affections of an ardent suitor in the hopes that he will whisk her off to the city before it is too late. Intoxicated by yesterday's triumphs and heedless of tomorrow's disasters, the three sisters are left to sift through the debris of their shattered dreams on the eve of the social and political upheaval that will transform Russia forever.

Stepping behind the camera for the first time since 1957's The Princess and the Showgirl, director Laurence Olivier demonstrates the same facility for cinematic expression that made his filmed versions of Hamlet and Henry V so definitive. In Olivier's assuredly brisk, graceful, meticulous, and witty rendering of Chekhov's masterpiece, the sisters are doomed to remain in their provincial purgatory. Olivier shepherds the cast of National Theater of London members (including Olivier himself and I Claudius star Derek Jacobi, in one of his first screen roles) through a compelling drama that never stoops to cliche. Photographed by ace British lensman Geoffrey Unsworth (2001: A Space Odyssey, Tess), Olivier and his cast propel Chekhov's play into a film that the New York Times' Vincent Canby acclaimed as "something quite rare."