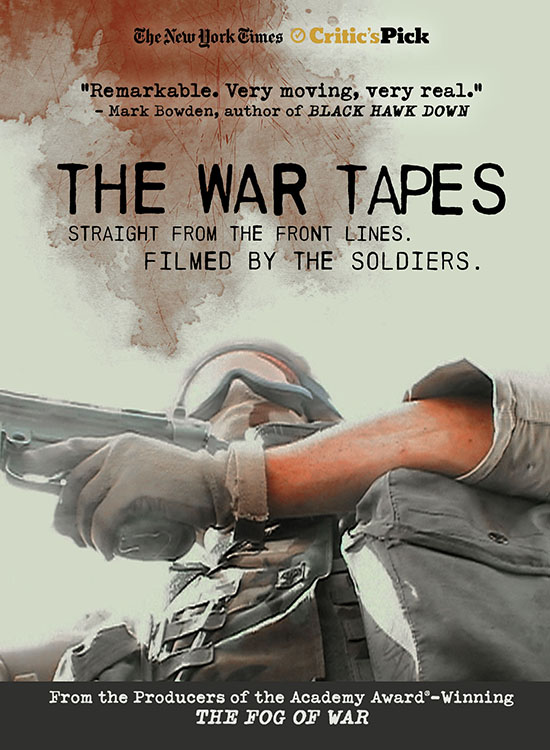 The war in Iraq has been the most covered conflict in history. 2,700 embedded reporters, instant messages and blogs from the front lines, websites and satellite phones have transformed the way the world sees war. At the same time, almost all of the mainstream media coverage has been sanitized, distorted and pre-packaged by government message machines, profit-driven news organizations or Hollywood-style producers pushing one-sided agendas.

Now comes THE WAR TAPES -- a real-life documentary that allows the soldiers to tell their OWN stories. Immediate, raw, and direct, THE WAR TAPES is the first film shot by the soldiers themselves; bypassing the "embedded reporter" filter and providing an intimate front-row look at how soldiers cope with life on the battlefield moment by moment.

THE WAR TAPES is unique among war documentaries: It is not a polemic for those who support the war or for those who want us out. It's a fresh and balanced look at the lives of men who don't fit conveniently into any stereotypes or manufactured roles. THE WAR TAPES is a feature-length film about three National Guardsmen deployed to Iraq in March 2004 - as the insurgency began to take hold.

First-time filmmaker Deborah Scranton directed the film from her farmhouse in rural New Hampshire. Up every night instant messaging with her soldier cameramen, Deborah pushed the soldiers to take the audience with them as they faced ambushes and roadside bombs. After an emotional homecoming, the filmmakers record the soldiers and their families as they try to reconstruct their civilian lives. We see them try to reconstruct their civilian lives after a year in combat.