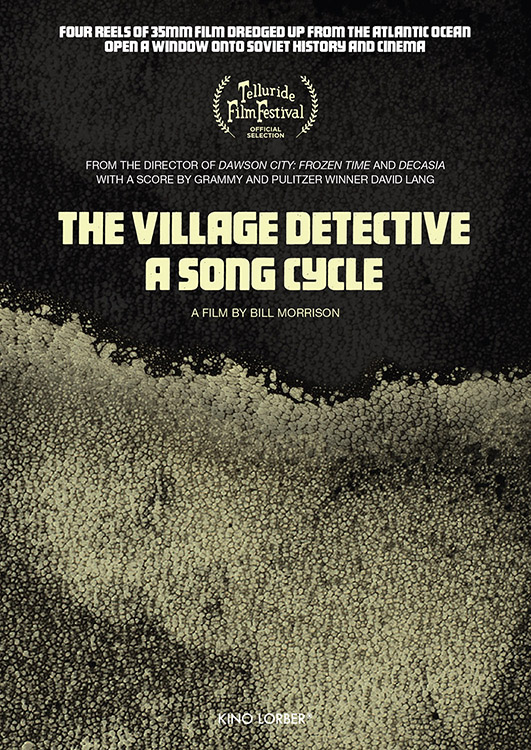 The Village Detective: a song cycle

During the summer of 2016, a fishing boat off the shores of Iceland made a most curious catch: four reels of 35mm film, seemingly of Soviet provenance. Unlike the film find explored in Bill Morrison’s Dawson City: Frozen Time, it turned out this discovery wasn’t a lost work of major importance, but an incomplete print of a popular Soviet comedy from 1969, starring the beloved Russian actor Mihail Žarov. Does that mean it has no value? Morrison thought not. To him, the heavily water-damaged print, and the way it surfaced, could be seen as a fitting reflection on the film work of Žarov, who re-emerges from the bottom of the sea 50 years later like a Russian Rip Van Winkle, to a world where reels of film are as antiquated as the Soviet Union. But if celluloid film is the only medium that can survive the ocean, how will future generations remember us? Morrison uses the discovery as a jumping off point for his latest meditation on cinema’s past, offering a journey into Soviet history and film accompanied by a gorgeous score by Pulitzer and Grammy-winning composer David Lang.

"A biographical documentary that only Morrison could deliver. With a fantastic score by David Lang, the director mesmerizingly weaves through an entire life of unbridled creativity while also, once again, instilling the importance of film preservation."

"Morrison’s movies feel like half-remembered reveries formed from memories you can no longer consciously recall. Hovering at the intersection of reappropriation, preservation, history, music, and art, any one of his works will haunt you for the rest of your life."

“The poetics of decomposition are the haunting, thrilling and... historically revelatory stuff of the cinema of Bill Morrison."

“A celebration of cinema that reflects life and art and its resilience to the test of time, both metaphorically and physically.”

“In merging these rescued images with beautiful, cerebral music, a new piece of art is built atop the old, offering both a celebration of what’s been found and what is still to come.”

"Critic's Pick! Bill Morrison, the poet laureate of lost films, turns the story of footage found near Iceland into a history of a slice of Soviet cinema."