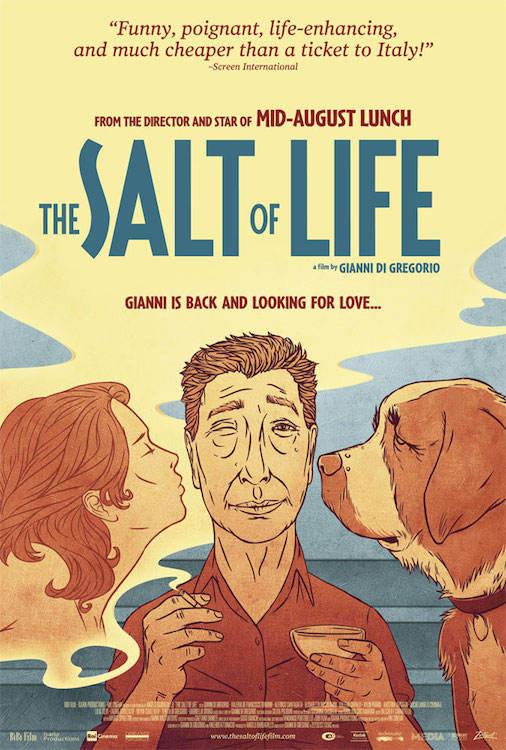 The Salt of Life

In his warm and witty follow-up to the 2010 sleeper hit Mid-August Lunch, writer-director-actor Gianni Di Gregorio has created another sparkling comedy—this time with a dash of the bittersweet. In THE SALT OF LIFE, Gianni plays a middle-aged retiree who has become invisible to all distaff Romans, regardless of age or relation. He contends with an aristocratic, spendthrift mother (again played by Lunch’s great nonagenarian Valeria de Franciscis Bendoni); a wife who is more patronizing friend than romantic partner; a daughter (played by Di Gregorio’s daughter Teresa) with a slacker boyfriend whom Gianni unwillingly befriends; and a wild young neighbor who sees him merely as her dog walker. Watching his “codger” friends snare beautiful younger women on the sun-kissed cobblestones of Trastevere, Gianni tries his polite, utterly gracious best to generate some kind of extracurricular love life—with both hilarious and poignant results.

The movie’s sensuous appreciation of ripeness and abundance extends to food, clothing and foliage; the lushness of a city in bloom virtually bursts from the screen.

Rueful, funny and wise, "The Salt of Life" is a comedy not of errors but of the tiniest of missteps. A warm yet melancholy film of quiet yet inescapable charm, it has a feeling for character and personality that couldn't be more delicious.

It's two fine comedies in a row for Di Gregorio, previously touted for Mid-August Lunch... A winning talent!

Di Gregorio keeps the action and the jokes lissome and fluid, rather than locking them into a rigid formula. As actor, director and writer, he approaches the idea of ever-present longing with the suppleness of a dancer. On the surface, The Salt of Life may seem like a movie made just for old folks. The trick is that it really is about the youth that stays with you, even when your aging body is working hard to convince you otherwise.

The pixie-dust ending will leave you smiling ...and likely singing an unexpected tune.

A tremendous achievement. Di Gregorio navigates his film with such a sense of delicacy that its tone is never coarsened.

Full of rich visual detail that will make you smile.

Gianni Di Gregorio is fantastic and should be getting more attention.... Of all of the movies I’ve seen this time in Rome, this is the one I most hope will make it to American theaters.

The film is packed with subtly observed details of behaviour and gesture of a kind we associate with Ealing comedy at its zenith, and an elaborate Chekhovian story is being told before we realise it.

Eminently worth seeing for its sheer warmth and humanity.

- Derek Malcolm - This is London

Shrewdly observed and sensitively handled this is a warm-hearted, civilised treat for anyone seeking refuge from the summer blockbusters.

Swingers for sexagenarians, Salt is perfect for older audiences who like a little spice in their cinematic offerings.

4 STARS. Lustrous, effortless, entrancing, it infects your mood as happily as a hazy Roman afternoon.

This thoroughly delightful Italian comedy by screenwriter-turned-auteur Gianni Di Gregorio is a kind of romantic realist-fantasia with Fellini in its DNA, and a little of Woody Allen.