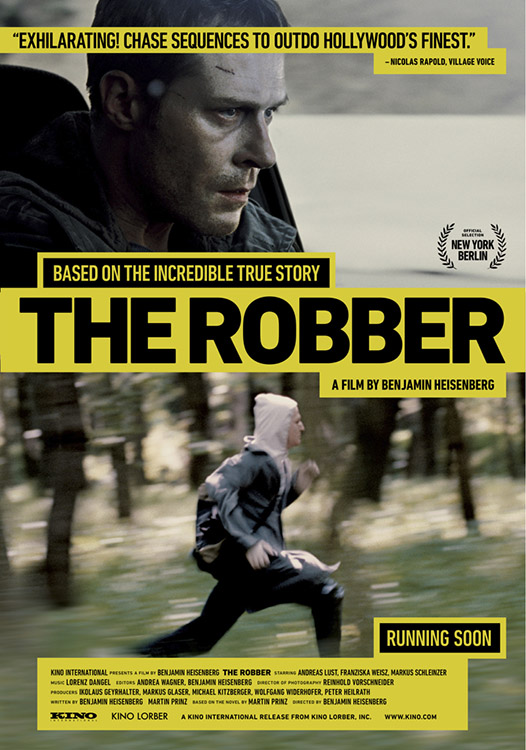 Based on the real-life story of one of Austria’s most-wanted bank robbers, THE ROBBER is a breathless thriller “as lean and taut as its marathon-winning title character.” (LA Times).

Johann Rettenberger leads a double life as a championship runner and serial bank robber, sprinting between heists (and away from police cars) as many as three times a day. As portrayed in a riveting central performance by Andreas Lust (Munich), Rettenberger is an obsessive loner more concerned with his lap times than other human beings. Once he falls into a relationship with a social worker, Erika (Franziska Weisz), it becomes impossible to hide his crimes, and the violence he reserved for his robberies starts seeping into his daily life.

Director Benjamin Heisenberg has created a powerful, visceral study of a pathological adrenaline junkie. But THE ROBBER, which is already slated for a Hollywood remake, is more than that: It’s also an action movie filled with “turbocharged chase-and-escape sequences” (Minneapolis Star-Tribune) that will leave you gasping.

"If you like the 'Bourne' movies but wish they were more cerebral...you might be the perfect audience for 'The Robber.'" - Mike Hale, The New York Times

"I stopped everything, turned off the computer, turned the ringer off my phone and just became wholly absorbed by the cinema of this movie. DO NOT MISS THIS MOVIE! Seriously. It is just amazing." - Harry Knowles, Aintitcool News.