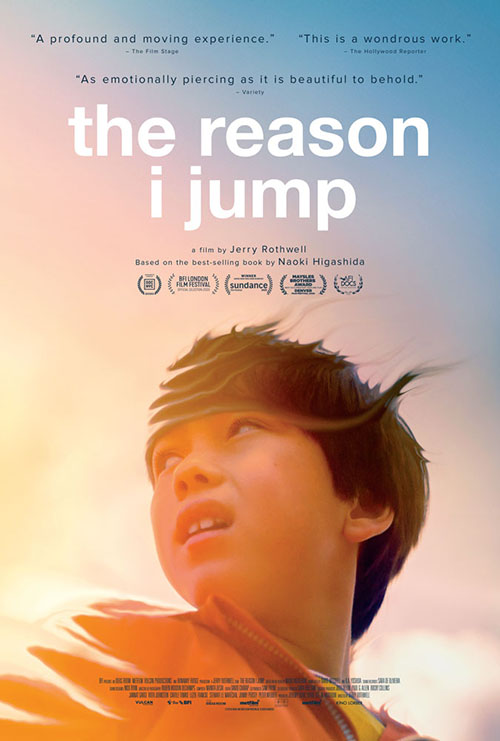 The Reason I Jump

Based on the best-selling book by Naoki Higashida, later translated into English by author David Mitchell (Cloud Atlas), The Reason I Jump is an immersive cinematic exploration of neurodiversity through the experiences of nonspeaking autistic people from around the world. The film blends Higashida's revelatory insights into autism, written when he was just 13, with intimate portraits of five remarkable young people. It opens a window for audiences into an intense and overwhelming, but often joyful, sensory universe.

Moments in the lives of each of the characters are linked by the journey of a young Japanese boy through an epic landscape; narrated passages from Naoki’s writing reflect on what his autism means to him and others, how his perception of the world differs, and why he acts in the way he does: the reason he jumps. The film distills these elements into a sensually rich tapestry that leads us to Naoki’s core message: not being able to speak does not mean there is nothing to say.

“This superb documentary has more heroes than any blockbuster would dare to put on the same screen.”

“This is non-fiction filmmaking at its most enlightening.”

"Exquisite. The Reason I Jump will change how you think."

"An inventive, sensuous documentary worthy of its source. This compassionate, creative documentary will open ears and eyes in equal measure. As emotionally piercing as it is beautiful to behold."

“Bridges the divide between the neurodivergent minority and the neurotypical majority with empathy and originality.”

"This is a wondrous work... that enlightens and informs but that is also ravishing to behold."

"The Reason I Jump will be revelatory for viewers who know little about the subject, and affirmative for caregivers and parents of children on the autism spectrum."

“Succeeds in presenting the world of autism as an audiovisual sensory experience.”

"A powerful challenge of our preconceived notions of autism… The film weaves together the stories of five mostly nonverbal autistic teens to present a rich tapestry of the autistic experience.”

"A profound and moving experience."

“The Reason I Jump is both advocacy and art... it’s a rare perspective onto the world we all share, a gentle but admirably firm request for compassion we’d all do well to heed."

"The thoughtful, transformative and deeply empathetic documentary The Reason I Jump seeks to illuminate the mysteries of the autistic mind and succeeds with flying colors... a leap of faith that is deeply rewarding."

“Does an excellent job of helping us better understand [autism] through the eyes and thoughts of five autistic children.”