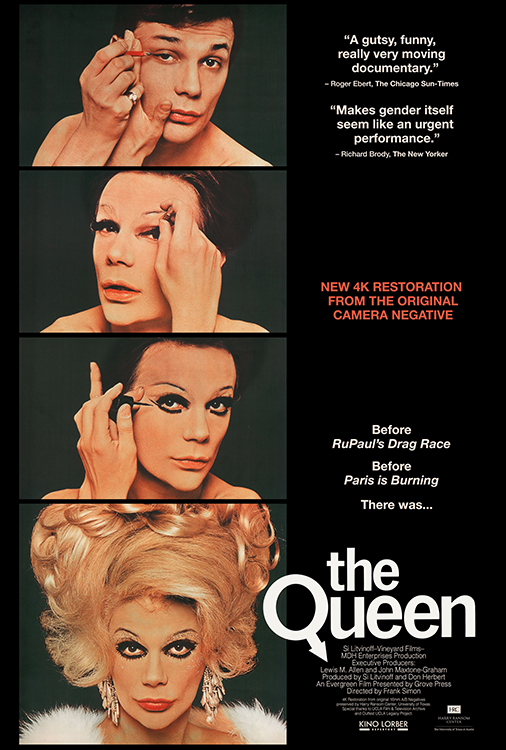 More than 40 years before RuPaul's Drag Race, this ground-breaking documentary about the 1967 Miss All-American Camp Beauty Pageant introduced audiences to the world of competitive drag. The film takes us backstage to kiki with the contestants as they rehearse, throw shade, and transform into their drag personas in the lead-up to the big event. Organized by LGBTQ icon and activist Flawless Sabrina, the competition boasted a star-studded panel of judges including Andy Warhol, Larry Rivers, and Terry Southern. But perhaps most memorable is an epic diatribe calling out the pageant's bias delivered by Crystal LaBeija, who would go on to form the influential House of LaBeija, heavily featured in Paris Is Burning (1990). A vibrant piece of queer history, THE QUEEN can now be seen in full resplendence thanks to a new restoration from the original camera negative.

“The mother of all drag documentaries.”
– Mekado Murphy, The New York Times

“Extraordinary. In making his documentary, Simon is filming the participants committing and confessing what at that time were criminal acts; they display their confidence in him, and also their defiant sense of shared purpose, in their poignant confessions and indelible testimonies about the lives of gay men in the time before Stonewall.”
– Richard Brody, The New Yorker

“A riveting chronicle of a 1967 drag competition.”
– Melissa Anderson, The Village Voice

"Before Pose, RuPaul's Drag Race, and Paris is Burning introduced the art of ballroom eleganza and drag excellence to audiences around the world, Frank Simon's 1968 documentary The Queen cast a glistening spotlight on the cutthroat world of drag pageantry."
– Joey Nolfi, Entertainment Weekly

"A beautiful film; its subject matter is treated with such sensibility, taste and compassion that what might have been a grindhouse movie emerges as an impressive human document."
– Judith Crist, New York Magazine

"Simon’s movie is...extraordinary because it captures so much, doubling as a time capsule of a generation’s innocence and fashion-forward sophistication. You can tell why it functioned as a template for many future gender nonconforming people looking for some sort of pre-internet guide through the confusing maze of sexuality and gender."
– Jerry Portwood, Rolling Stone

"A truly special documentary that feels as vital and vibrant in 2019 as it did during those first premiere screenings [in 1968]. An immensely important queer cinema text. Never once are these performers seen as anything less than self-aware artists, and this first-hand account of their experience in pre-Stonewall NYC is an essential and urgent piece of anthropology, even 50+ years later. "
– Joshua Brunsting, Criterion Cast

"This brisk, exuberant film is a remarkable time capsule of 1960s LGBTQ glamour and, in the words of its narrator Flawless Sabrina, “hip New York.” Some may have bought a ticket to The Queen in 1968 to gawk at “freaks,” but the joke would have been on them. This isn't an exploitation film, it is a celebration."
– Jordan Hoffman, amNY

"The pageant is riveting, but what is most memorable is the dignity of the participants: their frank conversations about the new possibilities of gender reassignment surgery, their tales of small-town life, and their various misadventures at the draft board."
– Lynn Yeager, Vogue

"An absolute must see."
– Mikelle Street, Out

"A shockingly vibrant document of the often forgotten early days of a scene that has grown in cultural visibility in recent years."
– David Bax, Battleship Pretension

"A revolutionary feat. The Queen is fully deserving of your adoration and respect."
– Aimee Murillo, OC Weekly

"Frank and funny. The blueprint for the representation of drag we know today , including RuPaul's Drag Race and its behind-the-scenes companion show, Untucked."
– Katie Walsh, Los Angeles Times

"The magic of the film is that it never judges its subjects; it celebrates them in all of their glory. The Queen certainly deserves to be seen, perhaps even more so given the recent Stonewall milestone. This documentary is a fascinating piece of history, captured in a style that is very much of—and ahead of—its time."
– Gary Kramer, San Francisco Bay Times

"A remarkable piece of cinéma vérité journalism. In addition to being an absorbing piece of “cinema direct” in the mode of Wiseman and the Maysles brothers, The Queen is a rare document of how queer people saw themselves in 1968."
– Nathaniel Bell, LA Weekly

"One of the most entertaining documentaries I have ever seen. The Queen crafts something that’s so vivid and real that you simply wish you could reach out and give it a bear hug and let them know how loved they really are. It’s a brief, but beautiful experience to have."
– jhunterheilman, Elements of Madness

"Kino’s restoration is very impressive, preserving the old-school and classy look and feel of the 16mm film that really helps immerse you in the era."
– Sean Boelman, PopAxiom

"Take yourself back to a time before Paris is Burning and witness the mother of queer documentaries on the big screen in all of its glory. "
– Cayla Rubin, Flaunt

"Bravo to Kino Lorber for giving us a 4K restoration of this lost gem so it can be appreciated by a new generation."
– Frank J. Avella, Edge Media

"The Queen is a gift to all film aficionados. For ushering the way to Paris is Burning, Pose, RuPaul’s Drag Race, and indeed much of current drag culture, the throne will ever belong to The Queen."
– Leslie Combemale, Alliance of Women Film Journalists

"A remarkable experience. What makes The Queen special is its ability to take us back in time, letting us be flies on the wall as pioneers of the soon-to-be-born LGBTQ movement grapple with boyfriend issues, the Vietnam War, family problems — and with being underground in a society where cross-dressing can be a crime."
– David Lewis, San Francisco Chronicle