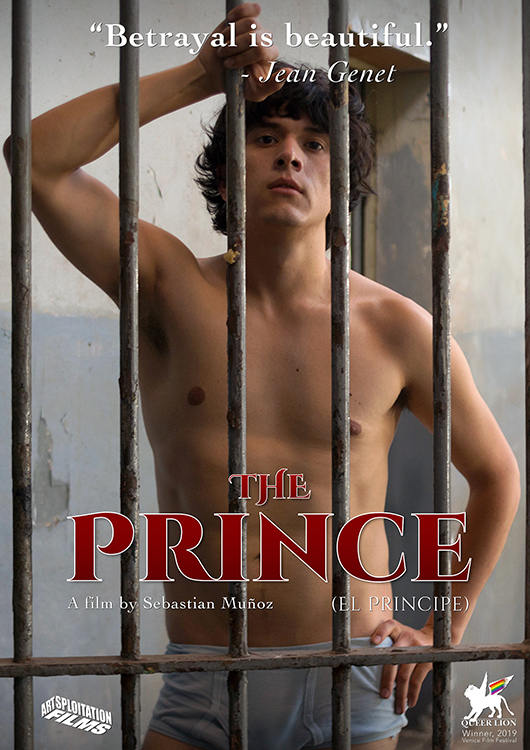 THE PRINCE is an explosive prison drama set in a repressive 1970s Chilean prison. During a night of heavy drinking, Jaime, a hot-tempered narcissist, suddenly stabs his best friend. He is sent to jail for murder and there, alone and afraid, he comes under the protection of a tough older inmate known as “The Stallion.” The unlikely pair begin a clandestine romance but violent power struggles inside the penitentiary threaten their bond. This searing story of survival at all costs, takes its inspiration from Jean Genet’s Un Chant d’amour and Fassbinder’s Querelle in its affecting exploration of masculine aggression, conflicting loyalties and pent-up sexual desires.

“A pretty boy is thrown into a dark and dank prison in 1970 Chile in The Prince (El principe). For most people, this would be a horror scenario, but this feature is such a work of homoerotic fantasy, pilfering liberally from sources ranging from Un Chant d’amour to Querelle and the opera omnia of Jean-Daniel Cadinot, that the protagonist doesn’t mind being locked away with a bunch of handsy, well-endowed inmates for even one hot minute.”

“Taking inspiration from the likes of Midnight Express, the film is an unflinching and at times unsettling look into life in a Chilean prison...a solid watch with strong performances and a couple of decent plot twists to keep you hooked.”

“As in the work of Jean Genet, The Prince offers a gritty but phantasmatic world of social deviance and sexual liberation, where the close proximity of barely clothed or naked male bodies sparks an irrepressible eroticism that can only be answered through intercourse or violence. Muñoz, a first-time director, does an elegant job of balancing the lurid and the tender.”

“Juan Carlos Maldonado commands the screen with brooding intensity as the dangerously impulsive title character in Sebastián Muñoz’s gritty, ’70s-set debut feature The camera doesn’t turn away from the ugliness of violence, nor from the homoerotic pull of copious male nudity.”

“With a lush cinematography, dreamlike music score and sexually explicit scenes that will remind you of the movies of Fassbinder and Derek Jarman, The Prince is immersed into an otherworldly atmosphere that manages to be equally sexy and sordid.”

“A dark, raw film that takes us directly into the harsh life behind bars…beneath this primal surface there exists a tale of loyalty love and compassion that blooms even in the most horrific of circumstance.” –