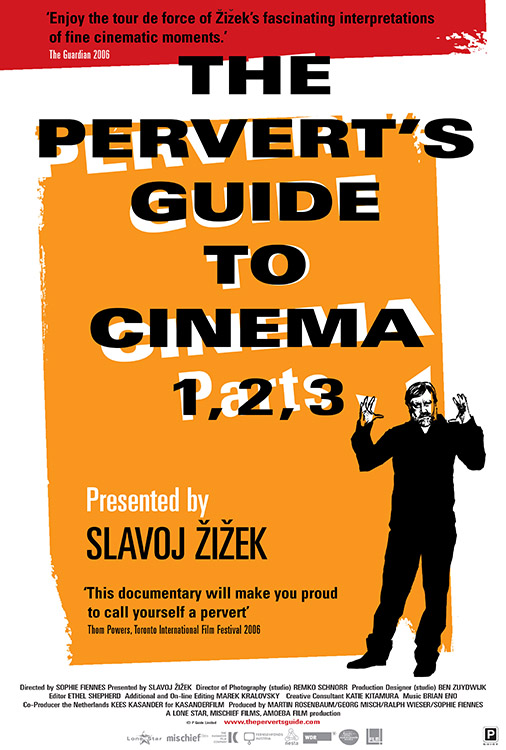 The Pervert's Guide to Cinema

THE PERVERT'S GUIDE TO CINEMA takes the viewer on an exhilarating ride through some of the greatest movies ever made. Serving as presenter and guide is the charismatic Slavoj Zizek, the Slovenian philosopher and psychoanalyst. With his engaging and passionate approach to thinking, Zizek delves into the hidden language of cinema, uncovering what movies can tell us about ourselves.

THE PERVERT'S GUIDE TO CINEMA offers an introduction into some of Zizek's most exciting ideas on fantasy, reality, sexuality, subjectivity, desire, materiality and cinematic form. Whether he is untangling the famously baffling films of David Lynch, or overturning everything you thought you knew about Hitchcock, Zizek illuminates the screen with his passion, intellect, and unfailing sense of humour. THE PERVERT'S GUIDE TO CINEMA applies Zizek's ideas to the cinematic canon, in what The Times calls 'an extraordinary reassessment of cinema.'

The film cuts its cloth from the very world of the movies it discusses; by shooting at original locations and on replica sets, it creates the uncanny illusion that Zizek is speaking from within the films themselves. Described by The Times as 'the woman helming this Freudian inquest,' director Sophie Fiennes' collaboration with Slavoj Zizek illustrates the immediacy with which film and television can communicate genuinely complex ideas. Says Zizek: 'My big obsession is to make things clear. I can really explain a line of thought if I can somehow illustrate it in a scene from a film. THE PERVERT'S GUIDE TO CINEMA is really about what psychoanalysis can tell us about cinema.'

THE PERVERT'S GUIDE TO CINEMA is constructed in three parts. Says Fiennes: 'The form of the Guide is a deliberately open one. There are three parts, but there could be more. Zizek's method of thinking is exciting because it's always building. Things relate forwards and backwards and interconnect into a mind-altering network of ideas. The film's title is something of a McGuffin - just a way to get you into this network.'

The teachers we remember most fondly are often the ones who entertained as they enlightened, through hyperbole seasoned with grains of salt. Mr. Zizek belongs in that company.

It is a fun romp through the annals of cinema by pop Slovenian philosopher and prolific writer Slavoj Zizek, who finds deep psychological meaning in a slew of movies.

[Zizek] steers clear of his usual dense Hegel-centric language and goes straight for the fun bits.

What helps the film rise above the level of a photographed college lecture is the director's inventive and playful presentation.