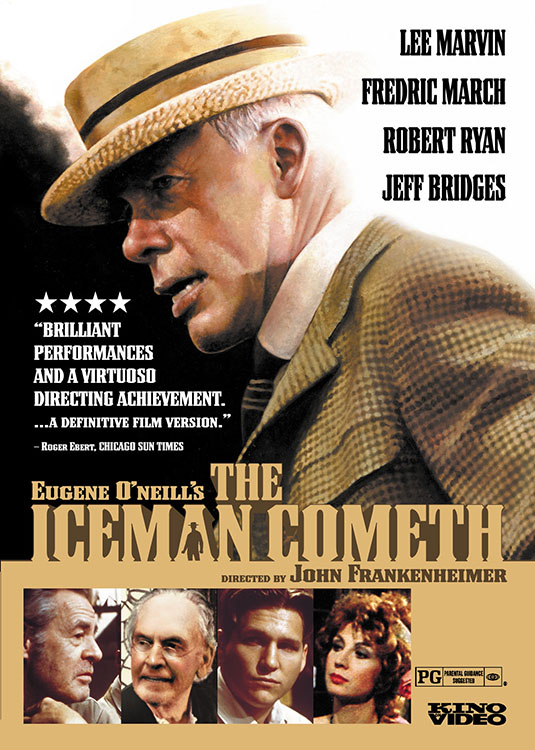 One of the few still undiscovered treasures of American 70s cinema, John Frankenheimer's masterful interpretation of Eugene O'Neill's The Iceman Cometh stands not only as the greatest achievement of the distinguished American Film Theatre project, but also as one of the single richest cinematic re-imaginings of any American play. Near the end of his brilliant and varied career, director Frankenheimer (The Manchurian Candidate, The Train) singled out the little known Iceman as "the best creative experience I ever had."

In the faded light of Harry Hope's 1912 skid row bar, a rag tag group of fallen men, each like a ghost haunting the wreckage of his own life, await the annual arrival of Hickey (Lee Marvin). This year, however, the charismatic Hickey brings not the usual rounds of drinks and pats on the back, but the unwelcome news that he's off the sauce for good and has come to persuade Hope's drunks to do the same. One by one, the regulars' booze-basted pipe dreams come under Hickey's leering microscope until finally the most shocking self-deception turns out to be Hickey's own.

Academy Award® winner Frederic March (The Best Years of our Lives, A Star is Born) leads an all-star dream cast in a final performance that the L. A. Times declared, "quite simply, perfect." Roger Ebert described Robert Ryan's (The Wild Bunch, The Dirty Dozen) characterization of Hickey's anarchist nemesis as "possibly the best of his distinguished career." But ICEMAN belongs to Lee Marvin, stepping out of the tough guy roles that made him a star into a haunting portrayal of the madman that hides beneath the smiling face of the life of the party.

"A majestic and thrilling achievement. Ely Landau and his associates have brought off something remarkable..." - Charles Champlin, The Los Angeles Times