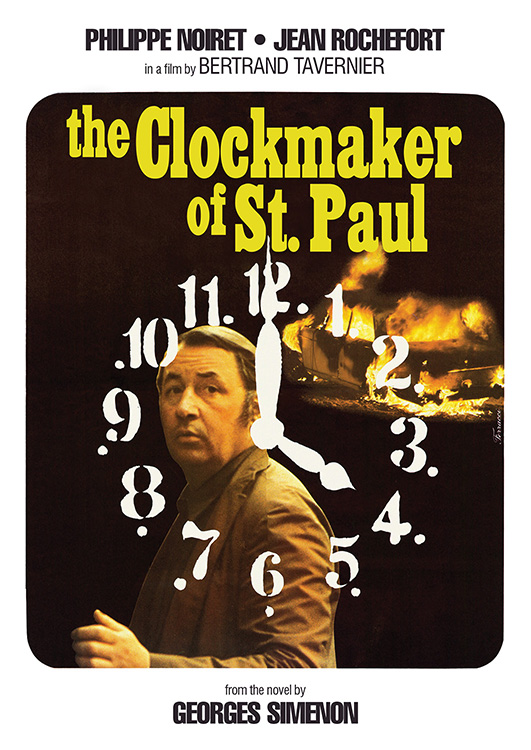 The Clockmaker of St. Paul

Bertrand Tavernier's 1973 filmmaking debut, THE CLOCKMAKER, is a strikingly sophisticated piece of cinema. Regarded by many as the most important French director of his generation, ex-critic Tavernier (Sunday In The Country, Coup De Torchon, 'Round Midnight, Capitaine Conan) enlisted New Wave veterans Jean Aurenche and Pierre Bost to collaborate on this screenplay (based on the novel by Georges Simenon) about a tranquil man whose life is shattered when he learns that his son is wanted for murder.

Philippe Noiret (Il Postino, Cinema Paradiso, Zazie Dans Le Metro) -- a regular in Tavernier's early work and often considered his on-screen alter ego -- is superb as the eponymous watchmaker who struggles to emerge from his self-willed solitude. Noiret's portrayal of restrained suffering is both brutal and beautiful as he deals with the reality of events and attempts to establish meaningful communication with his son. In the otherwise quiet town of Lyons, the promptings of a sympathetic police commissioner (Jean Rochefort) and a superficial media add to the burden on Noiret's shoulders.

THE CLOCKMAKER is Tavernier's first triumph, an exquisite exercise in emotional and ambient authenticity, and a subtle study of the parallels between parenting and government.

"The Clockmaker is a masterpiece...a great thriller and a journey of spiritual discovery...an exciting and touching movie." - Richard Dyer, The Boston Globe