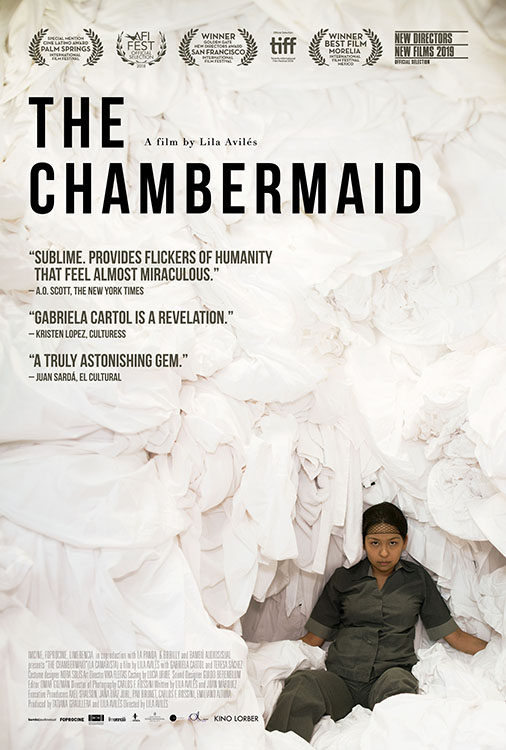 In her feature debut, theater director Lila Avilés turns the monotonous work day of Eve (Gabriela Cartol), a chambermaid at a high-end Mexico City hotel, into a beautifully observed film of rich detail. Set entirely in this alienating environment, with extended scenes taking place in the guest rooms, hallways, and cleaning facilities, this minimalist yet sumptuous movie brings to the fore Eve’s hopes, dreams, and desires. As with Alfonso Cuarón’s ROMA, set in the same city, The Chambermaid salutes the invisible women caretakers who are the hard-working backbone of society. – New Directors/New Films

"It may feel less epic in scale [than ROMA], but THE CHAMBERMAID is just as emotionally potent and perhaps even more successful at questioning the power dynamics of a workplace that has lost its sense of compassion."

"Possessed of a deadpan wit and downplayed humanistic warmth... and a poised lead performance by Gabriela Cartol. It will mark Avilés as a name to watch."

"Funny and playful... Nuanced and natural, it has a quiet and modest power as it comments on the ironies of contemporary cities like Mexico City and their growing economic divide."

"Formally confident and technically polished. Avilés is an exciting find."

“Newcomer Cartol is a revelation. There’s an inner light bursting to break free.”