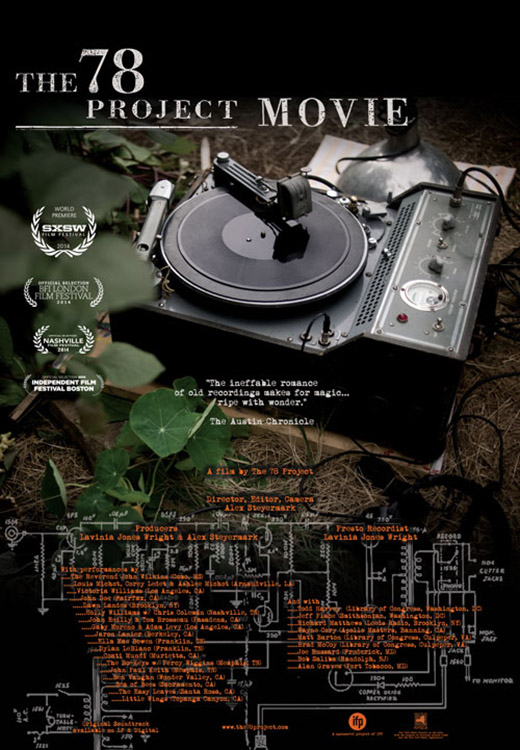 Based on the acclaimed web series but with all-new footage, THE 78 PROJECT MOVIE is a journey across America to record today's musical artists as they perform the early American songs that inspired a century of popular music -- exactly as they were originally recorded, instantaneously, on one-of-a-kind 78rpm lacquer discs. Inspired by Alan Lomax and his quest to capture music where it lived throughout the early 20th Century, the film celebrates the artistry and craft that spontaneously captured America's most authentic musical forms.

“The 78 Project grabs American music by the roots.” - USA Today

“A one-of-a-kind documentary that is part road movie, part concert film, and part journey through the past.” - The Commercial Appeal Memphis

“For fans of pure recording and its history, it’s compelling and informative.” - Billboard SXSW: The Fest’s Top Films

“Rises above simple vintage worship and does more than just glorify the past – it helps us experience it.” - The Village Voice

“The ineffable romance of old recordings makes for magic…ripe with wonder.” – The Austin Chronicle

"Like taking an old black & white photograph and letting us climb inside and feel a part of it." - NPR Morning Edition

“I didn’t imagine anything like The 78 Project, in which we discover that not only are dead media platforms not dead at all, but that they can be gateways into their own peculiarly new universes of creativity.” - William Gibson (in Oxford American)
Crew
Directed by Alex Steyermark