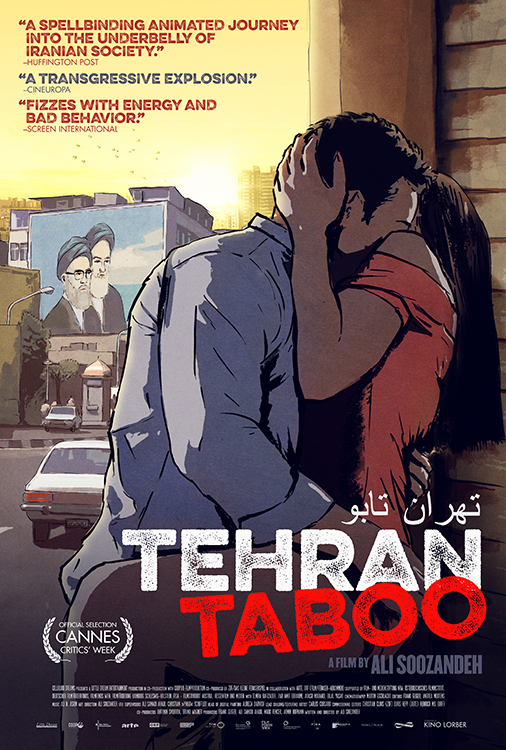 In this gorgeously animated drama, the lives of several strong-willed women and a young musician intersect. Their stories reveal the hypocrisies of modern Iranian society, where sex, drugs, and corruption coexist with strict religious law. In the bustling metropolis of Tehran, avoiding prohibitions has become an everyday sport and breaking taboos can be a means of personal emancipation. Nevertheless, women invariably end up on the bottom rung of the social order. A young woman needs an operation to “restore” her virginity. A judge in the Islamic Revolutionary Court exhorts favors from a prostitute in exchange for a favorable ruling. The wife of an imprisoned drug addict is denied the divorce she needs in order to live independently. Making use of rotoscope animation, expat Iranian filmmaker Ali Soozandeh creates a portrait of contemporary Tehran that would be impossible by any other means.

“Brisk and bracing. Lays bare the double standards that surround sex in Iran.”

"Striking. Sex, rage, and hypocrisy percolate... throughout every scene."

“A beautifully rotoscoped drama with intertwining stories set against the cognitively dissonant clash of Iran’s strict, theocratic society and the every-day realities of sex, drugs and corruption.”

“A spellbinding animated journey into the underbelly of Iranian society.”

“Visually striking. This wily account of 20-something Iranians negotiating an assault course of laws and prohibitions to get their kicks fizzes with energy and bad behaviour.”

“An audacious debut. Explore[s] the highly charged theme of sexual and personal freedom in Iran without salaciousness.”

“A transgressive explosion. Delivers a stunning penetration into the very disturbed hidden face of daily life in the Iranian capital.”