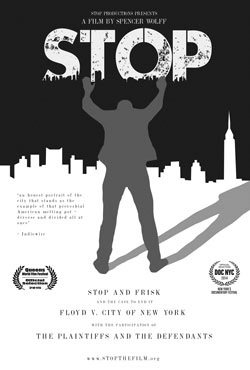 The feature length documentary STOP follows three years in the life of David Ourlicht, one of the four named plaintiffs in Floyd vs. City of New York. By interweaving the story of David's family with the action around the trial, STOP places the stop and frisk controversy in the context of a long history of civil rights. From David's Jewish grandfather, who describes being arrested in Greenwich Village on his first date with David's grandmother, an African-American woman, to David's biracial father, Italian-American mother, and mixed race sister, the Ourlicht family offers a powerful backdrop to the flashpoint issue of stop and frisk. The film asks: Must we trade safety for civil rights?

From interviews with the lead attorneys bringing in the case, to police officers who defend the practice, to the law professor who wrote the expert report, to coverage of Mayor Bloomberg and Police Chief Ray Kelly, STOP paints a picture of a city divided. Then the trial begins. From the rallies, to the press conferences, to the day David testifies, to closing statements and CCR's celebratory party, STOP offers a behind the scenes look at the trial, and gives a history of an era of intense political battles that the City of New York will never forget.

"Arriving at a key moment when relations between law enforcement and minorities in America have reached a boiling point, Stop casts a bright light on one aspect of the turmoil while also asking viewers to consider the proper balance between freedom and security." ★★★ F. Swietek, Video Librarian