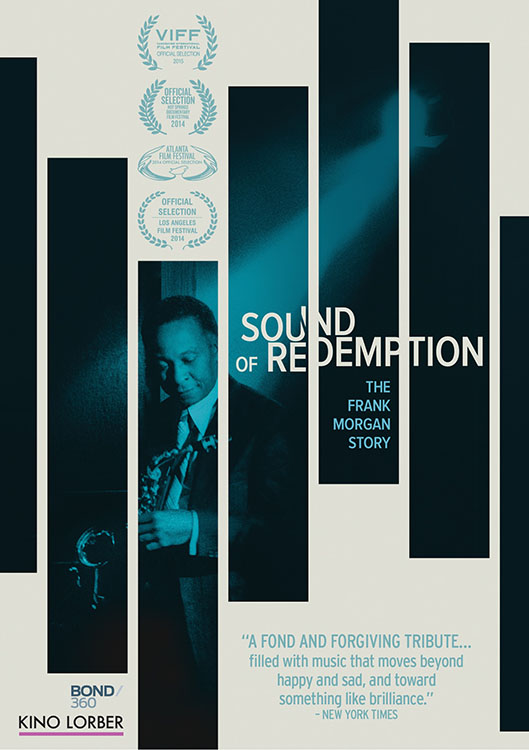 Packed with thrilling music, SOUND OF REDEMPTION: THE FRANK MORGAN STORY is an absorbing documentary about a gifted alto sax player and Charlie Parker's protégée, Frank Morgan. Morgan fell hard into heroin and got to be almost as good a conman and thief as he was a musician in order to feed his habit. The habit cost him 30 years of his life in and out of prison, most of it at San Quentin, where he performed in a big band with fellow junkie jazz musicians that grew famous in the Bay Area. To bring the past into the present, director N.C. Heikin brought an all-star band together into the "Q" for a concert. This hyper-emotional event forms the backbone of this riveting film.

“it’s a fond and forgiving tribute to the man, filled with music that moves beyond happy and sad, and toward something like brilliance.” - The New York Times

“2015 has been a great year for music docs, with films about Amy Winehouse, Nina Simone, Kurt Cobain and the Wrecking Crew all scoring with audiences and critics. And here, at year's end, comes "Sound of Redemption" — as good as any.” - The Los Angeles Times

“N.C. Heikin's hurtin' beauty of a doc” - The Village Voice

“the film has a strong feel for the emotion behind Frank Morgan’s acclaimed bebop." - The Hollywood Reporter

“Heikin's best inspiration is to stage and film a tribute concert at San Quentin. Grace Kelly's tender "Over the Rainbow" solo might stir tears, and Heikin, unlike so many impatient directors, knows that in a doc about musicians, the music should breathe.” - LA Weekly

"N.C. Heikin’s terrific music documentary interweaves a great concert by the late jazzman’s admirers and acolytes at the Bay Area prison with a stirring history of both the L.A. music scene and mid-century, African American show business in general. But really, the kickiest part is when it recounts the ingenious criminal schemes Morgan dreamed up to support his gargantuan heroin habit." - Los Angeles Daily News

"If you're a Jazz fan but unfamiliar with the Charlie Parker protege Frank Morgan, "Sound of Redemption: The Frank Morgan Story" will school you on a saxophone virtuoso and convict who lived what sounds like four adventurous, glamorous, tragic lives while earning the title "the new Bird." "Redemption" traces how deep the comparisons cut into Morgan's psyche." - RogerEbert.com

“Morgan's "redemption" came at a high price, and the film effectively balances realism and optimism in portraying his deeply troubled yet fulfilling life."  - Victor L. Schermer, All About Jazz