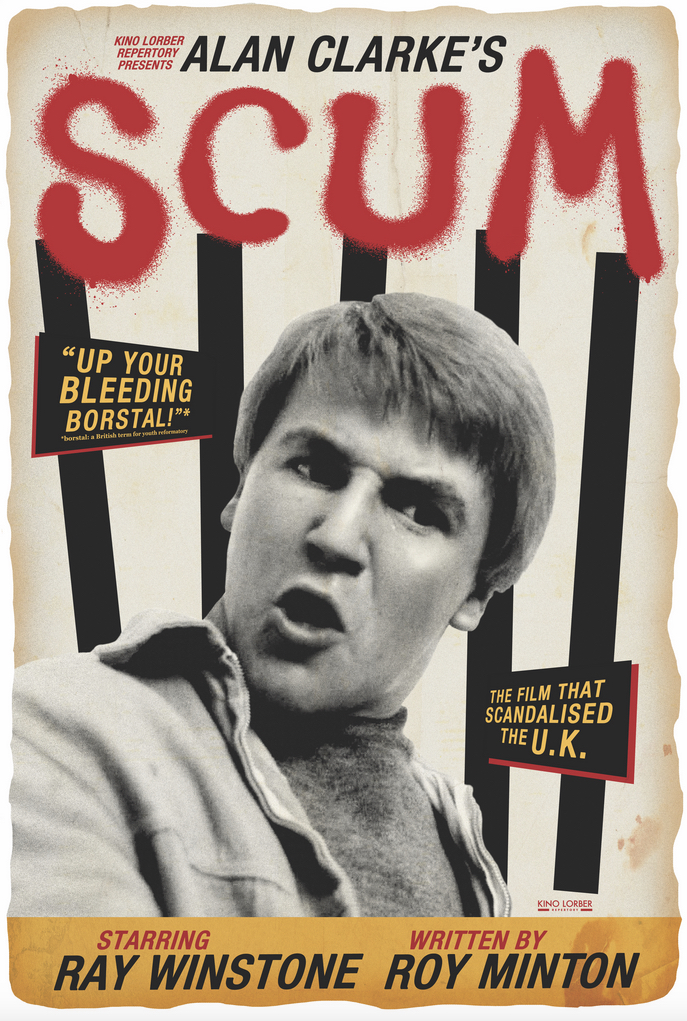 New Restoration! A landmark expose of Britain's violent reform schools, Alan Clarke's SCUM is a controversial shock to the system. Originally made for TV in 1977, the BBC withheld the program from release, due to its intense depictions of suicide, rape and racism. Refusing to be censored, Clarke reshot the film as a theatrical feature in 1979, making his attack on the borstal system even more scathing, and it is the latter, more vitriolic version that is available from Kino Lorber.

SCUM tells the story of Carlin (Ray Winstone, The Departed), a new reform school inmate with a reputation as a hard case. The authorities encourage gang leader Pongo (John Blundell) to humble Carlin, but he beats Pongo down and takes over the mantle of Daddy. The guards institute a reign of terror and neglect, with Carlin emerging as an unlikely leader. One of the most important British features of the last 35 years, SCUM still packs a wallop.

"Even after all these years, Scum still hits hard and deep. It has lost none of its power." – Philip Thomas, Empire

“I thought I’d already found all the masters and I then I saw Alan Clarke.” – Harmony Korine

“Alan Clarke’s once-banned, twice-filmed Brit scandal, Scum, stands as one of the great films about boys and violence, about the allure and horror and inevitability of young toughs seizing power by smashing some skulls — and replicating, in their own private hellscape, the societal structures that have ground them down.” – Alan Scherstuhl, Village Voice

“Ultimately, beyond the filth and fury, Scum is a starkly powerful critique and condemnation of the very idea of imprisonment, rehabilitative or otherwise. In an age of mass incarceration, it is as relevant today as it was in late ’70s Britain. Bring thick skin.” – Andrew Hultkrans, Artforum

“Though released nearly four decades ago, the impact of British director Alan Clarke’s stripped-down, visually matter-of-fact-yet-enrapturing “prison” drama Scum can still be felt in ripples throughout modern cinema…Scum lives up to its title to this day, its manic energy balanced with an assured and naked openness that creates a searing level of realism and, as such, savagery.” – Mike Mazzanti, Film Stage

“Scum [is] one of the most ethically revelatory films I’ve seen in a long time.” – Cosmo Bjorkenheim, Screen Slate

“Alan Clarke originally shot a version of this unsparing exposé of British reform schools for television…if some of the plot seems familiar, the intelligence with which Mr. Clarke dissects the flaws of Britain’s ‘borstal’ system is not.” – Ben Kenigsberg, New York Times

“A ferocious exposé of life in Britain’s notorious borstals, or youth detention centers, the movie tells you much that you probably already know about incarcerated young men, their vicious pecking orders and the corrupt authorities overseeing their rehabilitation. But it tells it with scalding wit and coolly riveting style, in the visual equivalent of spare, brilliant prose that occasionally bleeds (and bleeds and bleeds) into poetry.” – Justin Chang, Los Angeles Times

“Through a series of gripping set pieces Clarke presents an unflinching vision of damaged masculinity at the dawn of the Thatcher era, interrogating the social strictures that pit these young men in savage opposition to family, government, authority and one another…Scum stands as perhaps this under-recognized filmmaker’s most potent and unforgettable achievement.” – Jordan Cronk, Hollywood Reporter