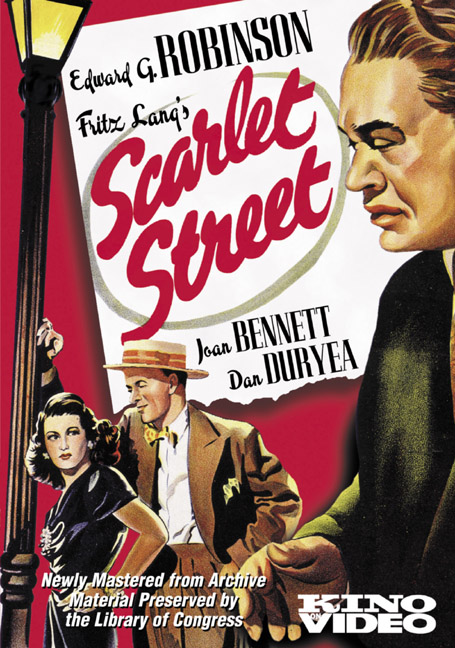 A box-office hit (despite being banned in three states), SCARLET STREET is one of legendary director Fritz Lang’s (M, Metropolis) finest American films.

When middle-aged milquetoast Chris Cross (Edward G. Robinson, Double Indemnity) rescues street-walking bad girl Kitty (Joan Bennett) from the rain-slicked gutters of an eerily artificial back-lot Greenwich Village, he plunges into a whirlpool of lust, larceny and revenge. As Chris’ obsession with the irresistibly vulgar Kitty grows, the meek cashier is seduced, corrupted, humiliated and transformed into an avenging monster before implacable fate and perverse justice triumph in the most satisfyingly downbeat denouement in the history of American film. Dan Duryea, as Kitty’s pimp boyfriend, skillfully molds “a vicious and serpentine creature out of a cheap, chiseling tin horn.” (The New York Times). Packed with hairpin plot twists and “bristling with fine directorial touches and expert acting” (Time), SCARLET STREET is a dark gem of film noir.

"The film is brilliantly shot and gorgeous -- not only the transfer, but the film itself -- and Lang's direction is full of inventive and telling details. This is one of the wittiest noirs, as well as one of the greatest." - Mick LaSalle, The San Francisco Gate

"[Scarlet Street and House by the River] Both are indispensable for admirers of the great German filmmaker." - Dave Kehr, The New York Times