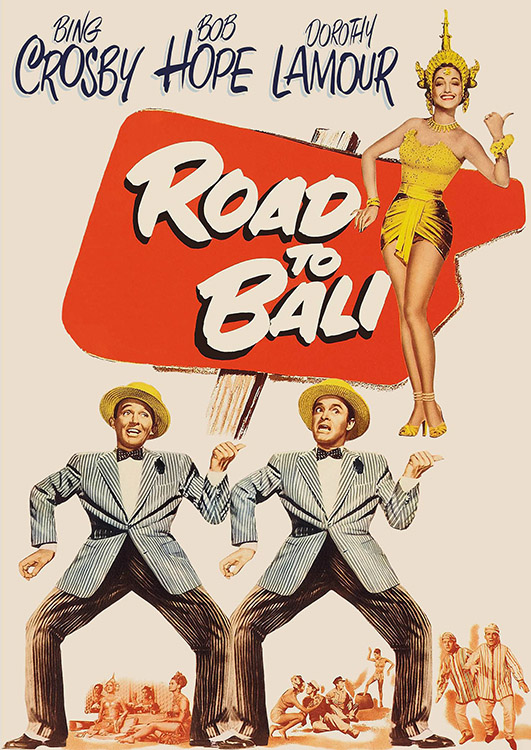 In this sixth of seven “Road to” movies, Bob Hope (Son of Paleface), Bing Crosby (Road to Rio) and Dorothy Lamour (My Favorite Brunette) team up in their only color film in the series. Hope and Crosby star as two out-of-work vaudeville performers who are on the lam. The two are hired by a South Seas prince as deep-sea divers in order to recover a buried treasure. They meet beautiful Princess Lala (Lamour) and vie for her affections. Of course, the boys run into the usual perils such as cannibals, a giant squid and numerous cameos from some of Hollywood's biggest stars like Dean Martin, Jerry Lewis, Jane Russell and Humphrey Bogart. Director Hal Walker (At War with the Army) was no stranger to the three actors, having directed the trio in Road to Utopia. The seventh and final "Road to" picture, Road to Hong Kong, would be released 10 years later for another studio and co-starred Joan Collins with Hope and Crosby, with Lamour only making a brief cameo appearance.

"Road to Bali ranks among the craziest of the Road series, and even if Bob and Bing are starting to show their age a bit, their verbal antics retain a comic spark more than half a century later and make it an easy recommendation."