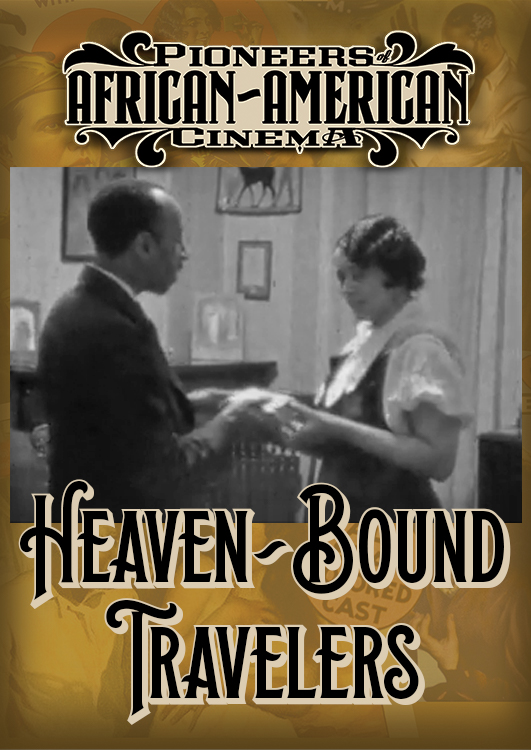 HEAVEN-BOUND TRAVELERS (circa 1935), 15 Min. Written and directed by James and Eloyce Gist. Music composed and performed by Dr. Samuel Waymon. Music produced by Dylan Kelehan. Mastered in HD from 16mm elements preserved by The Library of Congress. Restored by S. Torriano Berry.

It was only during the HD restoration of HELL-BOUND TRAIN for this collection that film historian S. Torriano Berry realized that among the 35 mixed rolls of film in the Gist collection were the fragments of their little-known follow-up: HEAVEN-BOUND TRAVELERS. A man wrongfully accuses his wife (Eloyce Gist) of adultery and banishes her (and their daughter) from his house. But as the weeks pass, he struggles with his own faith and ultimately finds an opportunity for redemption.

"Pioneers Of African-American Cinema is also hugely impressive. No wonder Martin Scorsese is proudly touting this set with a quote on the front of it: this is an historic release. Yes, it’s important and scholarly and worthy of praise. But with a dozen feature length films and more than 20 shorts and fragments, just a small sampling makes clear that it’s damn entertaining. Paul Robeson is just one of the many notable names appearing in or contributing to the wide range of movies, including melodramas, westerns, comedies, musicals and more."

"This very special collection illuminates one of the most fascinating and unjustly neglected corners of American movie history. Every film included in Pioneers of African-American Cinema has been lovingly restored, and every one is essential viewing."

"From the perspective of cinema history — and American history, for that matter — there has never been a more significant video release than 'Pioneers of African-American Cinema.'”

"The new five-disk set 'Pioneers of African-American Cinema' (Kino Classics) is a landmark in the history of the art form..."

"'Pioneers of African-American Cinema' is an essential and groundbreaking Blu-ray set. It's more than worthy to be considered one of the most important and valuable releases of the year, as it brings to light an important aspect of black and cinema history that must not be forgotten or ignored."

THE BOSTON HERALD
"Fascinating cinematic history...a look at independent cinema before that term came to suggest movies that would be film festival favorites at Sundance, Telluride and elsewhere."

RogerEbert.com (Blu-ray review):
"one of the most important and valuable releases of the year"

DVD TALK
"Starting in 1915 and going through the early 1940's this set not only gives film buffs a chance to see what movies African-Americans were making, but also to see what they had to say about their society....This is a great collection.... Highly Recommended."

FLAVORWIRE
"The new box set is both a necessary contextualization of a cinematic movement and a counter-narrative to American film history."

DVD BEAVER
"I was blown-away by this package and watched transfixed hour after hour... Very strongly recommended - especially to fans who may not be initially interested - there is an absolute treasure-trove of value here."

CRITERIONCAST
"This collection of films is a must own for cinephiles, and a worthwhile purchase for those with other sociological interests."

IN THESE TIMES
"Rough, passionate and unconcerned with Hollywood conventions, these films constitute a bedrock of pre-civil rights era culture...A fastidious and earnest piece of history-keeping, with a plethora of newly commissioned essays, documentaries and musical scores."