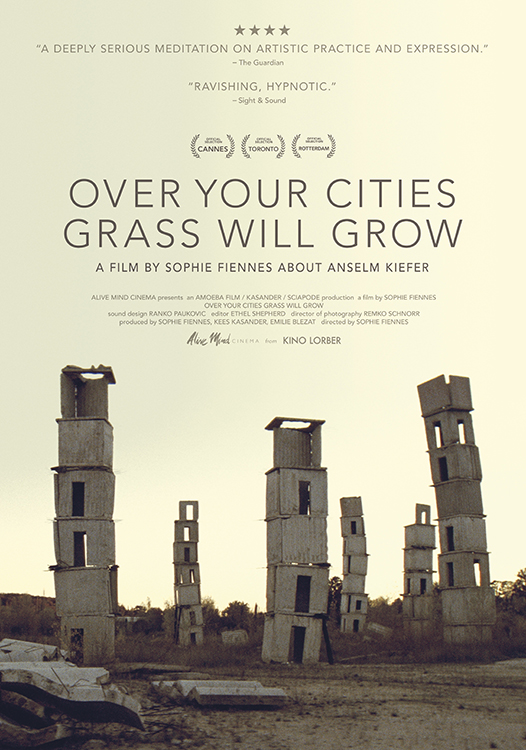 Over Your Cities Grass Will Grow

In 1993, artist Anselm Kiefer left Buchen, Germany for La Ribaute, a derelict silk factory near Barjac, a town in the south of France. Like a strange, sprawling village, La Ribaute extends over 35 hectares and is composed of old industrial buildings and working studios. From 2000, Kiefer began constructing a series of elaborate installations and paintings, creating pavilions to house them, while also digging a network of tunnels underneath the pavilions. OVER YOUR CITIES GRASS WILL GROW takes you into Kiefer's artistic estate to discover these sights and more—including an underground pool at the cul-de-sac of a tubular iron tunnel embedded within a crypt, a 20-meter tiered concrete amphitheater, and an open landscape of concrete towers assembled like so many card houses. Traversing this landscape, director Sophie Fiennes' critically acclaimed film immerses the audience in the total world and creative process of one of today's most significant and inventive artists.

"Fiennes...has created something difficult and distinctive in 'Over Your Cities Grass Will Grow' - a work of art that itself acts as a pathway into another artist's work." - Andrew O'Hehir, Salon

"Quite unlike anything we've ever seen before" - Christopher Bell, The Playlist

"A major accomplishment, the rare non-fiction film that pulls off the feat of revealing the complexity of its subject." - Tom Hall, IndieWIRE

"A film of austere beauty" - Maggie Lee, The Hollywood Reporter