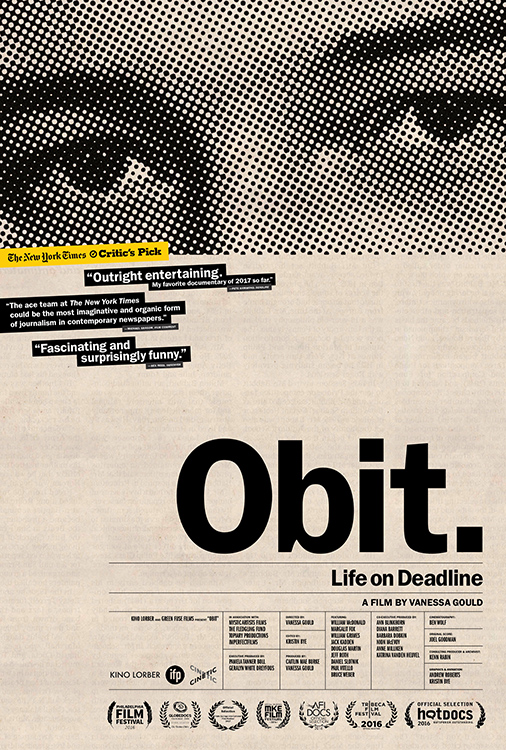 It's a shame no one wants to talk to them at parties, because obituary writers are a surprisingly funny bunch. Ten hours before newspapers hit neighborhood doorsteps—and these days, ten minutes before news hits the web—an obit writer is racing against deadline to sum up a long and newsworthy life in under 1000 words. The details of these lives are then deposited into the cultural memory amid the daily beat of war, politics, and football scores.

OBIT. is the first documentary to explore the world of these writers and their subjects, focusing on the legendary team at The New York Times, who approach their daily work with journalistic rigor and narrative flair. Going beyond the byline and into the minds of those chronicling life after death on the freshly inked front lines of history, the film invites some of the most essential questions we ask ourselves about life, memory, and the inevitable passage of time. What do we choose to remember? What never dies?

"Critic's Pick! Observant, graceful and nonchalantly witty. One comes away from Obit. grateful that the paper has at its disposal a team of humane, gifted people who make commemorating the dead a lively, lasting art."

"A remarkably good film about the craft of writing. I was amazed and often delighted by Obit."

"Unfailingly refreshing and engrossing. Obituary writing as practiced by the ace team at The New York Times could be the most imaginative and organic form of journalism in contemporary newspapers."

"One of the few great films I've seen about writing."

"A more lighthearted film on such a seemingly dark subject is hard to imagine.”

"Engaging and lively. An enjoyable behind-the-scenes look at one of journalism's odder jobs."

"A must-see. Breathes new life into the obituary."