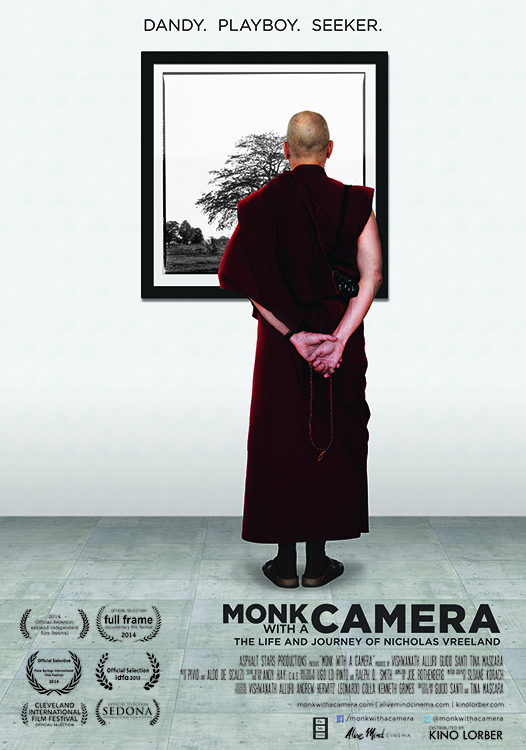 Monk With A Camera

Nicholas Vreeland walked away from a worldly life of privilege to become a Tibetan Buddhist monk in 1972. Grandson of legendary Vogue editor, Diana Vreeland, and trained by Irving Penn to become a photographer, Nicholas' life changed drastically upon meeting a Tibetan master, one of the teachers of the Dalai Lama. Soon thereafter, he gave up his glamorous life to live in a monastery in India, where he studied Buddhism for fourteen years. In an ironic twist of fate, Nicholas went back to photography to help his fellow monks rebuild their monastery. Recently, the Dalai Lama appointed Nicholas as Abbot of the monastery, making him the first Westerner in Tibetan Buddhist history to attain such a highly regarded position. MONK WITH A CAMERA chronicles Nicky's journey from playboy to monk to artist.

"[Not] just the biography of a remarkable man, but a revealing meditation on the relationship between spirituality and art" - Globe and Mail

"Buried beneath the admiring encomia and ritual spectacle that clog the pores of this maddeningly tactful film is a tantalizing glimpse into the personal and institutional mechanics of Tibetan Buddhism." - NPR

"Aptly serene in tone, this pleasing documentary by Guido Santi and Tina Mascara has a built-in mix of retro celebrity and spiritual appeal."- Variety

"Like a good photograph, or a wise abbot, it only presents the evidence and allows us to arrive at truth." - The New York Times