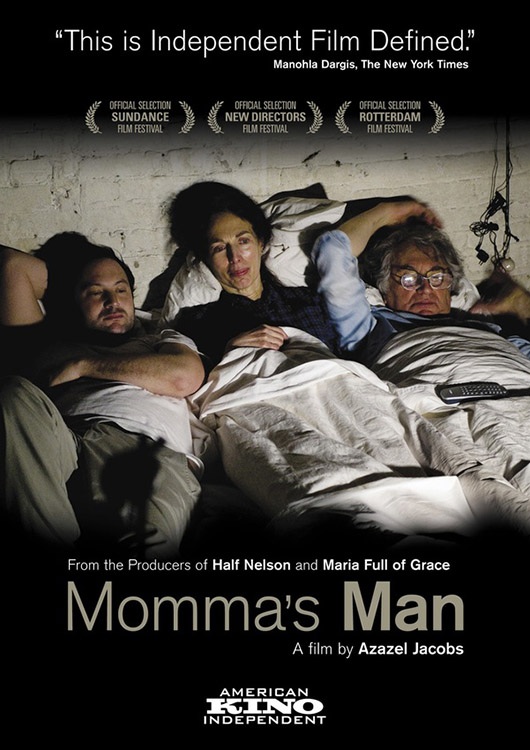 Bumped from a flight back to Los Angeles and the life, wife, and infant daughter that await him there, Mikey (Matt Boren) returns to his childhood home, a cluttered, cocoon-like Manhattan loft presided over by his bohemian parents. "You can stay here as long as you want," Mikey"s mother tells him.
But in Azazel Jacobs' MOMMA'S MAN, what begins as a respite from adult responsibility becomes a premature mid-life crisis. Re-installed in a household saturated with two generations of bric-a-brac evoking days gone by, Mikey starts to regress and drift back to an awkward youth he never outgrew.

To realize this "modestly scaled movie with a heart the size of Ritz" (New York Times), writer-director Jacobs cast his real life parents, artist Flo Jacobs and underground film legend Ken Jacobs (Star Spangled to Death), as Mikey's benevolent mother and father, and the Jacobs' family apartment as an archive of the unconscious where free floating anxiety renders Mikey a prisoner of his own nostalgia. Deftly balancing "melancholy emotional realities with unexpected moments of Chaplinesque comedy" (Variety), MOMMA'S MAN is a funny, touching, and bracingly honest look at the pleasures and perils of yearning for the imperfect past.

"An extraordinary movie in every way." - Peter Travers, Rolling Stone

THREE STARS, "A curiously affecting portrait of a man slowly succumbing to an enervating depression tha causes him to escape from his responsibilies into a comforting regression, this is recommended."