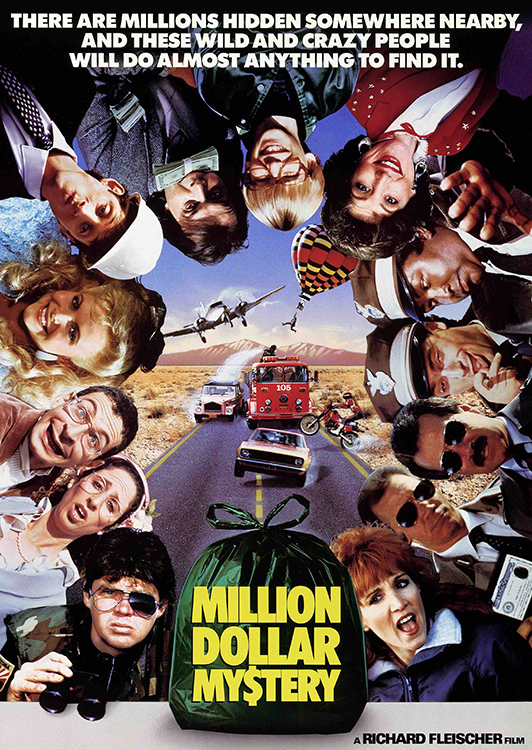 From Richard Fleischer, the acclaimed director of The Narrow Margin, 20,000 Leagues Under the Sea, The Vikings, Compulsion, The Don Is Dead and Mr. Majestyk, comes this wild and wacky comedy in the tradition of It’s a Mad, Mad, Mad, Mad World and Scavenger Hunt. There are millions hidden somewhere nearby… and these wild and crazy people will do almost anything to find it. In a dingy diner somewhere in the southwest desert, a former White House aide takes a seat at the counter, orders a bowl of chili and suddenly drops dead of a heart attack. But before he dies, he reveals to the rest of the customers that he’s hidden $4 million in embezzled loot on four different bridges throughout Arizona. Now a frantic pack of cash-crazed strangers—including a pair of nerdy newlyweds, a family of snooty yuppies, a sexy girl group, professional wrestlers, bumbling federal agents and one very deranged ranger—will speed off by land, sea and air on an insane race for riches. How far will they go in the ultimate dash for cash? Written by Tim Metcalfe (Revenge of the Nerds), Miguel Tejada-Flores (Screamers) and Rudy De Luca (Transylvania 6-5000) and starring Eddie Deezen (Grease), Tom Bosley (TV’s Happy Days), Rick Overton (Eight Legged Freaks), Rich Hall (TV’s Not Necessarily the News), Kevin Pollak (The Usual Suspects), H.B. Haggerty (Deathsport), Rudy De Luca (High Anxiety) and Playboy playmate Penny Baker.