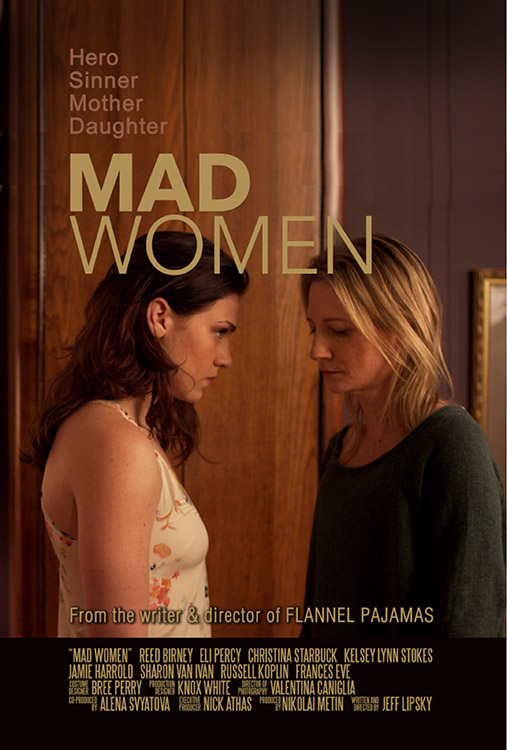 Young and beautiful, Nevada Smith craves to find a place for herself in a family of overachievers. Her mother Harper is running for political office, her father Richard is a successful dentist and her older sister, Judith, is a pediatrician working overseas with Doctors Without Borders. In addition, the family is still grieving the death of a sister who died at a young age. When Richard is suddenly sent to prison, Nevada is overwhelmed with the emotional need to comfort her mother and does so in the most shocking way imaginable, pondering whether this has made her heroic, mythic, savior, or pariah. Kelsey Lynn Stokes, Reed Birney, Christina Starbuck, Frances Eve, and Jamie Harrold lend verisimilitude and poignance to a septet of characters facing cataclysmic yet virtuous challenges.

“ ‘Mad Women’ pushes the boundaries of morality. Mr. Lipsky is skilled at creating taboo-busting characters and letting them reveal themselves in the kinds of long, detailed scenes actors love.  Reed Birney and Christina Starbuck are exceptionally good. Its eclectic characters certainly linger.” -The New York Times

“Jeff Lipsky dares us to rethink desire. In this universe, every relationship—especially between family members—has a sexual component and every core memory... represents a stage in the acquisition of a sexual identity. Most if not all of those stages are like traumas frozen in time. It forced me to rethink the way sexual desire saturates everything, along with extreme vulnerability of children." --New York Magazine