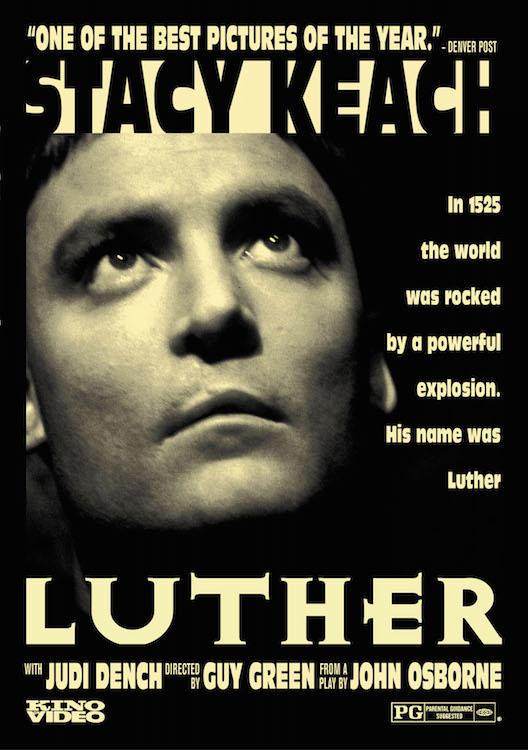 Stacy Keach, as German cleric Martin Luther, miraculously breathes life and intimacy into one of the most famous social revolutionaries and theological firebrands in world history. Directed by former cinematographer Guy Green, Luther's graceful camerawork explodes the restricting theatrical proscenium without violating the unity of John Osbourne's (Look Back in Anger) original play.

LUTHER compresses nearly two decades into a provocative character study that parallels Martin Luther's deepening religious dilemmas with the irresolvable earthly anxieties that shaped his beliefs and his rebellious search for truth. We're introduced to Luther as a young monk in 1506, as he defends his vows to his jealous and disapproving father (Patrick McGee). But as Luther's religious commitment deepens, his faith in an increasingly commercialized, politicized, and spiritually empty Papacy atrophies until, having preached against the medieval Catholic Church's hypocrisy, he is called to account by the very bishops he must denounce.

Keach's Luther is backed by a powerful supporting cast, including Kubrick stalwart Leonard Rossiter, and Dame Judi Dench (Shakespeare in Love, Chocolat) as the nun Luther takes for his wife. In LUTHER, Martin Luther's condemnation of the Catholic Church and incitement for the Protestant reformation become the last desperate acts of a brilliant but deeply troubled man of conscience who has run out of options.

"One of the best pictures of the year." - The Denver Post