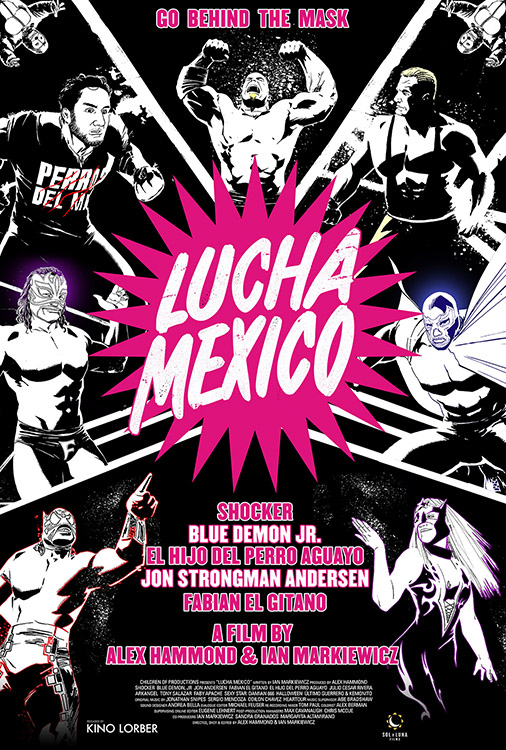 In Mexico, the fight between good and evil has been waged every week for decades, thrilling generations of fans with the spectacle of Lucha Libre. Real life superheroes and villains, these masked wrestlers work tirelessly to entertain their legions of fans. Gaining unprecedented access to all the major Lucha organizations, directors Alex Hammond and Ian Markiewicz offer an entertaining, no holds barred look at some of the sports top performers, featuring "1000% Guapo" Shocker, Luchador heir Blue Demon Jr, tragic hardcore wrestler El Hijo Del Perro Aguayo, and extreme American bodybuilder Jon "Strongman" Andersen. LUCHA MEXICO goes behind the mask, on a journey into the heart of Mexico.

“Few films I’ve had the pleasure of seeing from this year’s DOC NYC lineup are as breathlessly enjoyable as this film. A delightful, and shockingly powerful, look at a world most people aren’t familiar with. Delightfully energetic and a must-watch for wrestling fanatics, this is a universally engaging documentary that’s as high speed as it is genuinely moving and intellectually engaging.” -Criterion Cast

“Lucha Mexico competently captures the nostalgic spectacle of this Mexican sport with vibrant glee. It offers up an infectious energy and a behind-the-ropes look at its legendary heroes. It’s quite a party!” -Film International

“A headlong dive into the world of masked superheroes and villains." -David Edelstein, New York Magazine

"The film is one of the fest's [DOC NYC] most generous in terms of breadth — there are revelations about the sport, its performers, and its fans every few moments, and the screen bursts with color and wild motion.” -Village Voice