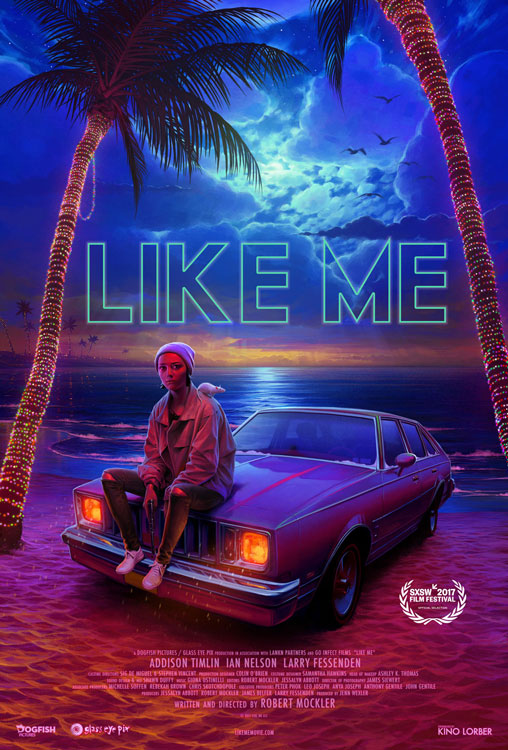 A reckless loner (Addison Timlin, Little Sister) sets out on a crime spree that she broadcasts on social media. After releasing a video of herself robbing a convenience store, she amasses a huge following. While traveling along the coast, she encounters a drifter, an Internet troll, and a paint huffing outsider who are all pulled into her circle of chaos, junk food, and drugs. Robert Mockler’s visually arresting debut feature, produced by indie horror veteran Larry Fessenden, takes the viewer into a world of fabricated personalities and offers a thought-provoking portrait of isolation in our increasingly digital world.

“Writer-director Robert Mockler deploys a healthy skill with Kubrick-torqued visual experimentation... ‘Like Me’ has an eccentric bravura to it. It's like an artisanal cocktail of modern-day danger, pain and alienation: whether it wants you to sip or gulp, it finds its way into your head.”

"An impressionistic portrait of modern estrangement... offers a uniquely weird take on loneliness and lunacy."

“Delivers a wonderfully twisted antihero only possible in the 21st century. She’s a symbol of youth rebellion — decked out in torn jeans and dark jackets with shadowy black hair atop a piercing gaze, she’s Lisbeth Salander with a YouTube fetish.”

"An unconventional fusion of horror film, road movie, and sadomasochistic sex drama... Blossoms into a debauched fantasia of longing, potentially announcing the arrival of a significant new artist."

“Rises above the pack in a few ways – ranging from its ambitious style to the out-of-whack humanity of its two lead performances.”

"Wildly unpredictable. The most exciting debut you’ll see this year. Or maybe any."

- – Matt Donato, We Got This Covered

"A neon-soaked fever dream. The most unpredictably wonderful movie-going experience."