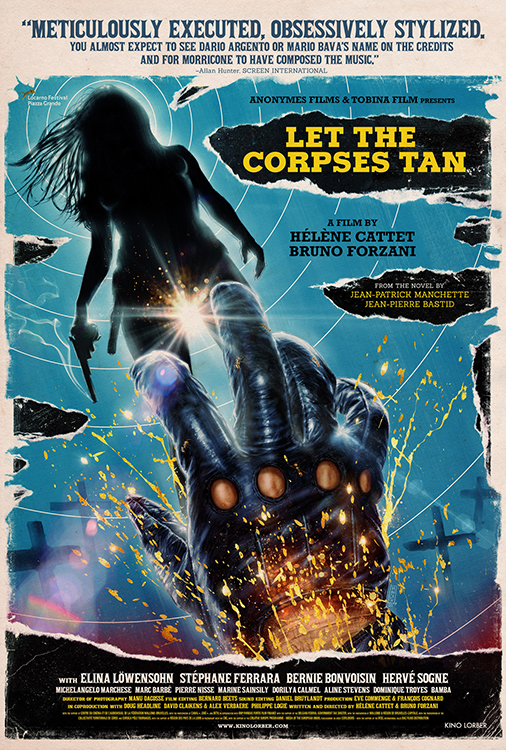 Belgian filmmakers Hélène Cattet and Bruno Forzani trade in the crushed velvet and creeping shadows of their giallo-worshiping first two films (Amer, The Strange Color of Your Body’s Tears) for blistering sun, creaking leather and raining bullets in this glorious homage to 1970s Italian crime films. After stealing a truckload of gold bars, a gang of thieves absconds to the ruins of a remote village perched on the cliffs of the Mediterranean. Home to a reclusive yet hypersexual artist and her motley crew of family and admirers, it seems like a perfect hideout. But when two cops roll up on motorcycles to investigate, the hamlet erupts into a hallucinatory battlefield as both sides engage in an all-day, all-night firefight rife with double-crosses and dripping with blood. Based on a classic pulp novel by Jean-Patrick Manchette and featuring vintage music cues by Ennio Morricone, Let the Corpses Tan is a deliriously stylish, cinematic fever dream that will slamfire your senses like buckshot to the brain.

"Meticulously executed, obsessively stylized. You almost expect to see Dario Argento or Mario Bava’s name on the credits and for Morricone to have composed the music."

“More times than I could count I had no idea what the hell was happening, and also just didn’t care that I didn’t know. Let the Corpses Tan is that strange and beautiful.”

“A perverse, blasphemous western that will blow your mind. Completely bonkers. A head-spinning barrage of treachery, nastiness and hallucinatory bedlam.”

"Beautiful, experimental and bold. One of the most exciting cinematic experiences I’ve had in quite some time. I couldn’t look away for fear of missing yet another thing I’d never witnessed before."

"This is a worshipful film, adoring of guns, of gold, of the human body, and of cinema itself. Supplicate yourself before it."

“Deliriously gleeful. A wild heaping of spaghetti-western psychedelia… pieced together in rhythmic crescendos designed to titillate not with sex or violence, but through sheer cinematic inventiveness.”

“Ripe, baroque, and lascivious. Quickens the pulse… as if every image were fired at us from a gun barrel.”

"An exercise in fetishization, of both the human body and the visual medium that captures it. There’s a gleeful, twisted imagination at work here."

"A fetishistic, ultra-violent exploitation flick that's all kinds of artistic and exciting. A stunning display of visual seduction and slaughter-first gunplay."

- – Matt Donato, We Got This Covered

"Let the Corpses Tan might be the best 1970s Italian crime thriller never made."

"Cattet and Forzani might have made the quintessential midnight movie."