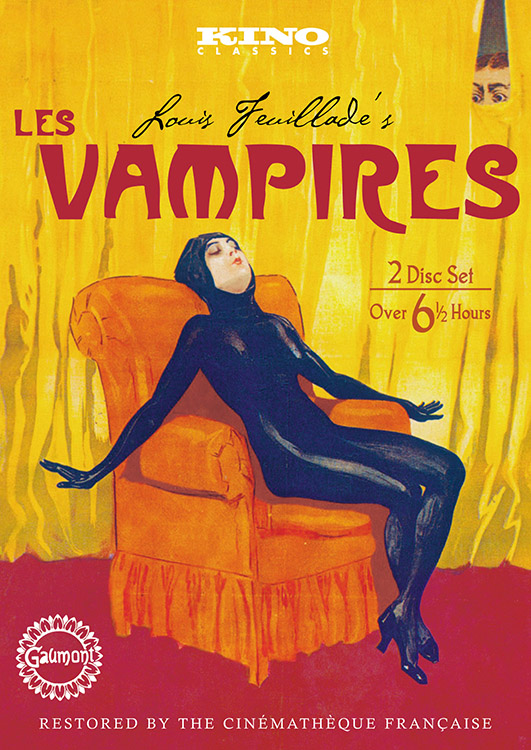 Philippe and Jane, newly married, hire Augustine Charlet to be their chamber maid. Madame d’Alba, a Vampire, hypnotizes Augustine to unlock the door of Philippe's apartment at 2 am. Mazamette, who has taken to Augustine, awakens and sees her descend the stairs.

As influential a silent film as there is, it's not only a grandfather to thrillers and gangster films everywhere, it stands on its own as something more than an important antique. It's one of the greatest film serials of all time, and just as fresh today as it was in late 1915 and early 1916.. - CriterionCast.com

Louis Feuillade suspenseful movie serial Les Vampires is a real treat. It's pulp fiction brought to life on a cinema screen--over six hours of colorful criminals, wooden do-gooders, and outrageous acts of malice and evil. Though some of the aesthetics are certainly out of date, the fun to be had here is in getting caught up in the sensation. The massive plot will keep you guessing from one episode to the next, and you'll want to find out what happens to the alluring Irma Vep and all the rest. Kino's restoration looks great on Blu-Ray, making for an important addition to any cinephile's movie collection. Highly Recommended. - DVD Talk

Les Vampires was cool before there was a 'cool'. It is so easy to immerse yourself in. Strong recommendation! - DVD Beaver

Highly recommended to those who own a Blu-ray Disc player and HD monitor, this is the best-looking of all home video editions of Les Vampires so far, surpassing the original DVD edition from Waterbearer Films - Silent Era