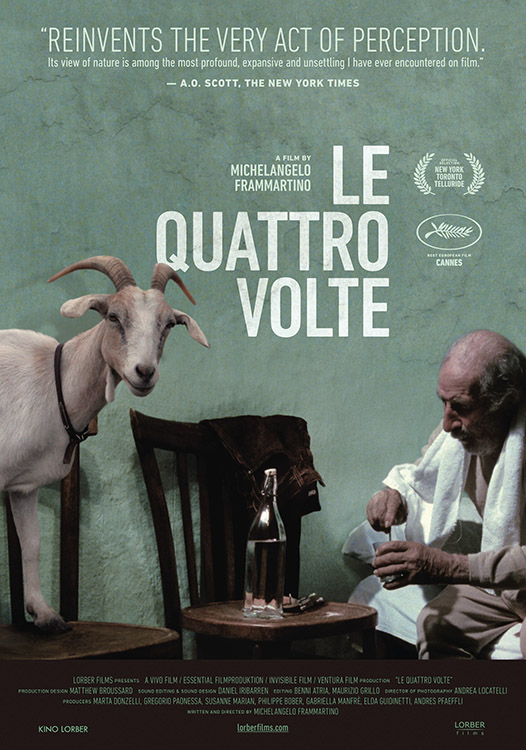 LE QUATTRO VOLTE (The Four Times) is an ineffably beautiful meditation on the mysterious cycles of life. Set in Italy's mountainous region of Calabria, it traces the path of one goat herder's soul, as it passes from human to animal to vegetable to mineral. Director Michelangelo Frammartino was inspired by Pythagoras' belief in "four-fold transmigration" of souls, but his film is far more physical than philosophical. In gorgeous long takes, he captures the daily routines of the herder, a baby goat, an imperious tree and a humble charcoal kiln. Plus there is a scene-stealing cameo from a stubborn sheepdog, who hilariously interrupts an Easter Procession.

Working as both a spiritual investigation and a documentary of Calabrian life, LE QUATTRO VOLTE's placid surface hides a complex understanding of humanity. Everything is connected in Frammartino's sublimely mystical universe, in which he finds both humor and pathos in the hypnotic rhythms of everyday life.

"Its view of nature is among the most profound, expansive and unsettling I have ever encountered on film...Mr. Frammartino's eye for both comedy and mystery produces compositions that are so strange and memorable that they seem to reinvent the very act of perception." - A.O. Scott, The New York Times