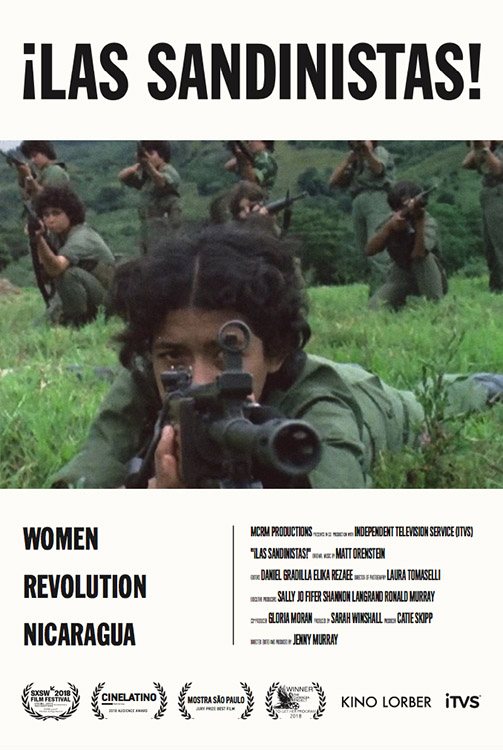 ¡LAS SANDINISTAS! reveals the untold stories of Nicaraguan women warriors and social revolutionaries who shattered barriers to lead combat and social reform during Nicaragua’s 1979 Sandinista Revolution, the ensuing US-backed Contra War, and documents their leadership in the continuing struggle for justice today. The film portrays a magical moment in world history when thousands of female rebel fighters transformed society’s definition of womanhood and leadership. Nicaraguan women from every social class fought on the front lines on an unprecedented scale in the Sandinista rebel army, and after the defeat of the brutal Somoza dictatorship, these same women pioneered groundbreaking nationwide medical, social, and education programs. Today, as the current Sandinista government is erasing these women's stories of heroism, social reform, and military accomplishments from history books, these same women are fighting to reclaim history - and are once again leading inspiring popular movements for equality and democracy.

"Women who fought and died for the Sandinistas tell stories about the triumphs--and failures--of the Nicaraguan revolution in this fascinating feminist documentary."

"A rousing, tribute to the female members of Nicaragua’s revolutionary Sandinista party."

"!Las Sandinistas! is Jenny Murray’s first feature-length documentary and a fascinating tale chronicling the rise and fall of the revolutionary group that overthrew the Nicaraguan government. Shifting from the viewpoint of the various lead subjects, !Las Sandinistas! elevates its subject matter beyond mere footnote in the Iran Contra debacle, giving us powerful peek into the female half of the revolution."

"This is one of the best documentaries I have seen in a while, and I hope gets seen enough to make it into contention for next year’s Academy Awards. It’s certainly Oscar-worthy. If this is the best movie I see at SXSW this year, I will have had a great festival."

"A documentary of ripe impact and value...with its rich archival footage, and its nuts-and-bolts view of a revolution that was every bit as seismic as the one in Cuba, it’s instructive to see how the rebellion against an autocracy gets built: gun by gun, body by body, skirmish by skirmish."
-Variety
Crew
Directed by Jenny Murray