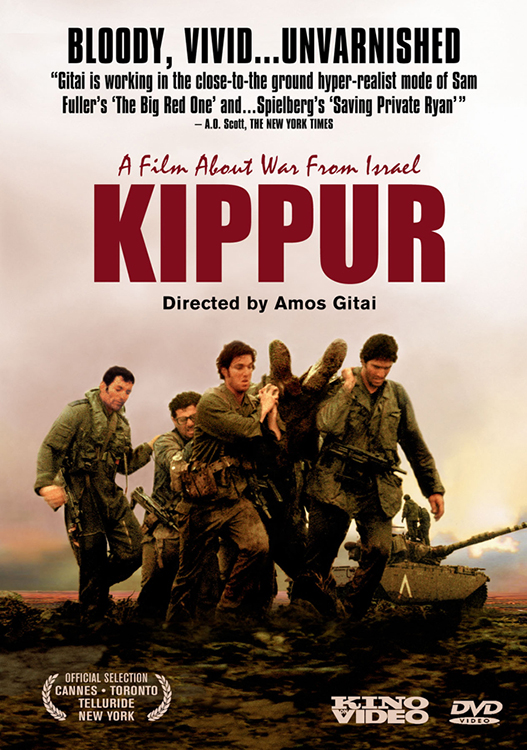 From the director of Kadosh, an official selection at the Cannes, New York and Toronto Film Festivals, KIPPUR focuses on the presence of the human spirit in battle. Despite its extreme graphic depiction of war, the film was recognized as a major cinematic breakthrough. Called an "existential rather than a political event" by A.O. Scott (The New York Times), KIPPUR is a gut-wrenching journey through beautiful landscapes ravaged by gunfire, exploding mines, fear and desolation.

The film takes place in 1973 during the Yom Kippur War, in which Egypt and Syria launched attacks in Sinai and the Golan Heights. Although the story is told from the perspective of Israeli soldiers, the film is far from being an exercise in propaganda. We are led by Weinraub (Liron Levo) and his friend Ruso (Tomer Ruso) on a day that begins with quiet city streets, but ends with death, destruction and devastation of both body and mind.

Although shot in long and unobtrusive takes, the film never reaches the realm of voyeurism. We are treated to a first-person experience, yet there exists a nagging sense of dislocation. Various scenes are awash in the surreal as Weinraub's head hangs out over a rescue helicopter's open door, watching with tranquil desperation as the earth passes beneath, the overpowering whir of the blades creating a hypnotic state.

It is not a traditional "blood, guts and glory" war film. There are no men in battle, only the rescue crews trying to pick up the broken pieces. KIPPUR is the shell-shocked memoir of the director Gitai, himself a participant in the conflict, and of the days that changed his life forever.

"A classic...takes you smack into the chaos of combat." - Kevin Thomas, The Los Angeles Times

"Confirms Gitai as the finest filmmaker Israel has ever produced." - David Sterritt, The Christian Science Monitor

"In this visceral drama, traffic jams, trenches filled with corpses, and even the mud of the battlefield are imbued with existential angst, redeemed only by the men's somber tenderness toward each other." - Leslie Camhi, The Village Voice