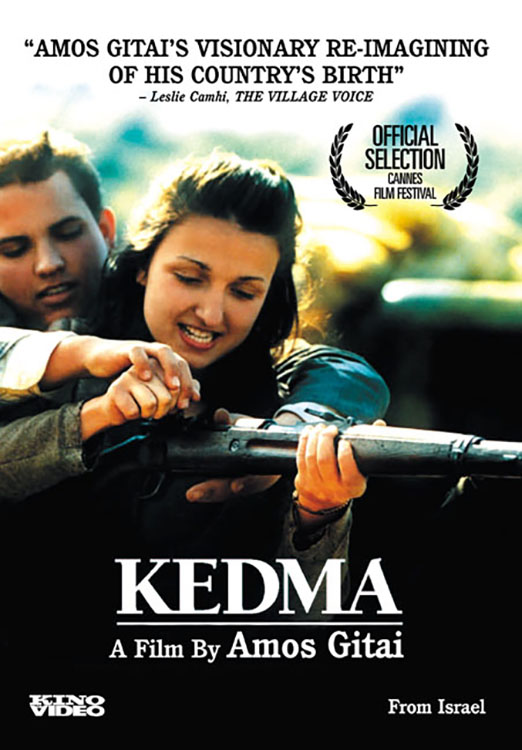 An Official Selection at the 2002 Cannes Film Festival, KEDMA is renowned Israeli filmmaker Amos Gitai's (Kippur, Kadosh) powerful drama about a group of European Jewish refugees who arrive at Palestine in the critical year of 1948. Carried on the deck of the freighter Kedma, they come ashore to find not the Promised Land of milk and honey, but a war-torn desert in the bloody throes of transformation into the state of Israel. Rescued from a British army ambush at beachside by Palmach Jewish guerillas, the Kedma's ragged refugees are remade into soldiers expected to offer their lives to defend a nation that does not yet exist in a land they've never known.

"Forget about the past if you want to survive" declares Rosa, a Russian Jew who endured Siberian imprisonment. With no common language and only the clothes on their backs, Rosa, Yiddish-speaking teenager Menachem, and Lodz ghetto escapee Janusz form a desperate fellowship as they follow their rescuers into battle. The chaos of a war for independence may be the only thing that can at last sever the ties that bind the Kedma's passengers to the tragic memories of a Europe they will likely never see again.

KEDMA is both a journey to survival and a chronicle of rebirth. As Rosa and her fellow Europeans engage Arab resistance and elude British pursuit, they transform from exiles to insurgents and from Jews to Israelis. Directed by Gitai in a near documentary realist style, KEDMA is an intimate epic of "overwhelming passion" that "tells you all you need to know about why this war still wages on with no end in sight." (Time Out New York)

"Combines brutal cinema verite, with passages of poetry. A tough, anguished reconstruction of an episode in the founding of Israel." A. O. Scott, The New York Times