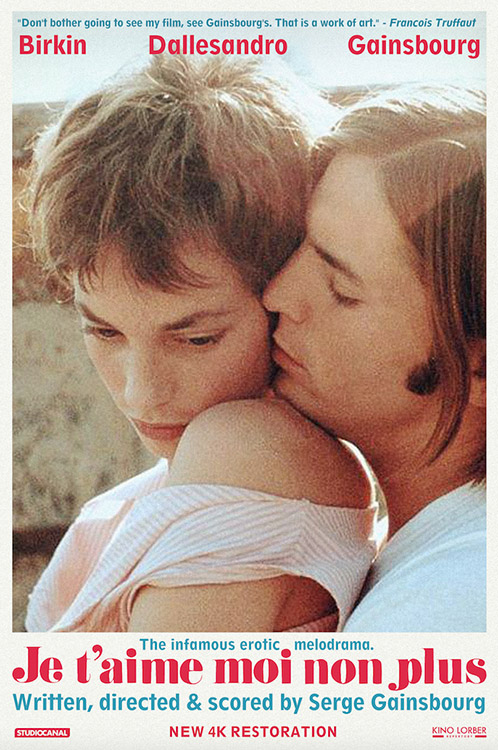 Purchase: $9.99
Mature content, must be 18 or older to watch
Add to Watch List
Already purchased? Login to Watch.

"Don't bother going to see my film, see Gainsbourg's. That is a work of art."
- Francois Truffaut
"Gainsbourg, like Prince after him, came from music to filmmaking with a strong cinematic sense...he doesn't put a foot wrong. [The film is] genuinely, eccentrically Gainsbourgian."
- Glenn Kenny, The New York Times
"Whereas the original Gainsbourg-Birkin song is full of breathy, orgasmic wordplay, Je T'Aime...the film is breathtakingly wordless at times, as Birkin's boyish, sexually desperate snack bar owner and Dallesandro's brutish gay garbage truck driver(!) navigate one of the most rocky and blackly humorous relationships in all of French cinema. It's intellectually explicit, beautifully offensive, full of summer, trash and ass - an absolute must-see."
- Tillage Arts
"Simply put, Je T'Aime Moi Non Plus is one crazy film and even after forty years, it retains the power to leave even the most jaded of moviegoers startled by the on-screen goings-on. At times reminiscent of a French take on the filmography of the late, great Russ Meyer, this meditation on sex, love, lust, death and misplaced machismo is one of those rare films that could comfortably screen in arthouses and grindhouses alike while arousing outrage (among other things) from the patrons of both. As a cinematic equivalent to Gainsbourg's musical endeavors, it does cast an undeniable spell on viewers, and seeing two of the most distinctive sex symbols of the Seventies paired up together is certainly compelling."
- Peter Sobczynski, RogerEbert.com
"At once iconic and transgressive, Gainsbourg’s queer-eyed view of Americana is trash of the most beautifully bleak kind.”
- Film4

"A true WTF?! experience. Now that you can find Je T’Aime, it is duly worth a look, at least for fans of bizarre cinematic curios."
- 48Hills

"One of the most powerful and stripped down messages about the gay experience that the Western world would see for a couple decades. All three of the leads are fantastic and the sets, costumes and photography are as real as it gets. Check out this tasteless, and timeless, work of weapons grade angst and judge for yourself."
- Ron Wilkinson, It's Just Movies

"[Has] a sweet sadness, courtesy of Birkin’s performance, that gives the film a surprising depth. Gainsbourg wrote, directed and scored Je T’Aime Moi Non Plus, and his talent for the visual rivals his musical ability. Je T’Aime Moi Non Plus is packed with masterfully composed shots that combine to create a feast for the eyes. (That the musical score is also a feast for the ears should go without saying.) It’s another fitting example of what made Serge Gainsbourg such a unique and, yes, controversial talent."
- Lee Jutton, Film Inquiry

""Je t’aime moi non plus is maybe one of the 'coolest' films I have ever seen. ...We give this a VERY strong recommendation! Pheww... Watch this!"