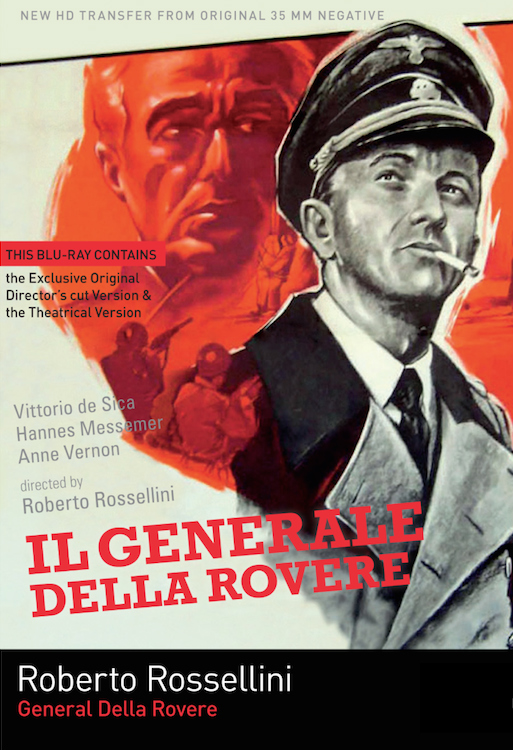 Winner of the Golden Lion at the 1959 Venice Film Festival, directed by Roberto Rossellini and featuring world cinema icon Vittoria de Sica (The Bicycle Thief), IL GENERALE DELLA ROVERE is a film based on the true story of Emanuele Bardone, who, during the height of WWII, exploits his fellow Italians by telling them that he will find their missing loved ones in exchange for money. When he attempts to save a man who had already been executed, he is turned over by the man's wife and is forced to become a spy in the Nazi prison for one of the German commanders, Colonel Mueller (Hannes Messemer). Under the false identity of Generale della Rovere, he is ordered to bring the Italian resistance fighters among the prisoners out into the open. As the fake general slowly makes friends with these men, he becomes a leader of sorts, which causes him to realign his moral code and to come to terms with his past life.

"This well-wrought drama was given the "Best Foreign Film" award in 1960 by the New York Film Critics, and it won the Golden Lion at the 1959 Venice Film Festival." - THE NEW YORK TIMES

"GENERALE DELLA ROVERE manages to give us a glimpse of the meaning of moral courage, the meaning of duty and the powers of redemption, while never letting us get bored. De Sica's magnetic anti-hero makes it difficult to look away and Rossellini's supple direction never lets the film slack." - THEFILMREVIEW.COM