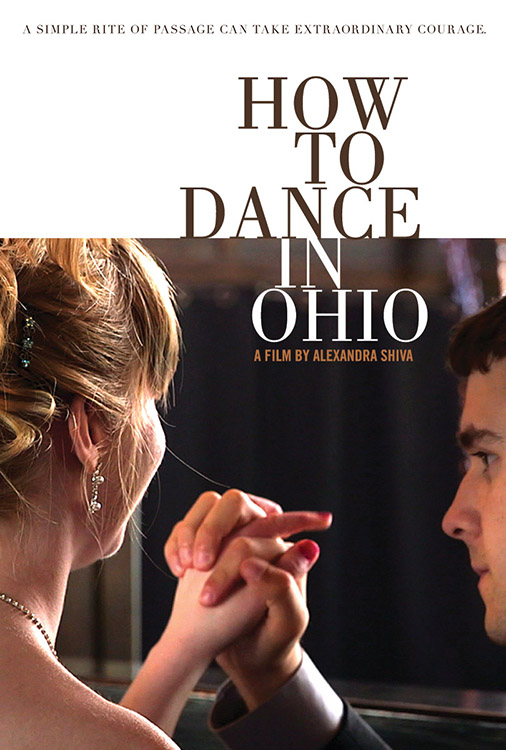 How to Dance in Ohio

A first kiss, a first dance. These are the rites of passage of American youth that hold the promise of magic, romance and initiation into adulthood. For kids from all walks of life, these first steps toward intimacy are at once exciting and terrifying. For some teenagers and young adults on the autism spectrum, the transition can be nothing less than paralyzing. In Columbus, Ohio, a group of young people with an array of developmental challenges prepares for an iconic event - a spring formal dance. They spend 12 weeks confronting and practicing their social skills as they prepare for the big event, to be hosted at a local disco. Working with their trusted psychologist, they deconstruct fear and larger-than-life social anxiety one step at a time by picking dates, dresses, and, ultimately, a King and Queen of the Prom. HOW TO DANCE IN OHIO is a story of the universal human need to grow, connect and belong as uniquely dramatized by individuals facing the deepest struggle toward social survival.

In HOW TO DANCE IN OHIO, we get to know three girls transitioning into adulthood. The film takes us inside their group therapy sessions, their relationships with their families and their private thoughts as they struggle to understand and navigate the social rules that surround the suspenseful and heightened experience of a first date. Through their stories, and a chorus of other young women and men confronting similar issues, these girls reveal the hard work, perseverance and resilience it takes to be a part of contemporary society, along with the extraordinary challenges of being different. Entertaining, funny and heartbreaking, HOW TO DANCE IN OHIO challenges us to question and celebrate the path to human connection and to rethink the definition of normal.

"More striking is How to Dance in Ohio's ability to get the girls parents to open up. One of the real treasures of a documentary such as this is how it can soothe another kind of remoteness. A viewer can sense that these folks have waited a long time for someone to come along and ask them about their fascinating kid. They seem grateful to get that chance." The Washington Post

And by the end of the documentary, which features a dance and a contest for king and queen, you cheer for the winners, and for the simple triumphs of being fully alive." The Huffington Post

"There's a great deal of humor in the film, particularly when Shiva turns her lens on those who try to help the autistic kids become more like them, in a sense. But it turns out that these instructors are less self-aware than the kids themselves, who live on the edge of their feelings, their various truths, with such open hearts that sometimes one must turn away from looking at the screen, which is framed by Shiva's moral seriousness and her belief, ultimately, in the world as a better place than most of us will ever know." The New Yorker

"People with autism don't get enough opportunities to do things, collectively, with others. We looked at this as a chance to be part of something big. But we decided that this was worth it, to maybe help others, and that sealed the deal for us." - Dr. Emilio Amigo, NBC News Interview

"Its engagement with its subjects will help generate understanding and empathy among mainstream viewers, and that can only be a good thing." The Hollywood Reporter

"If I could make every person on Earth who has no prior experience with autism sit down and watch any one movie to understand what my own life with autism has been like, How To Dance In Ohio would be that film." - Stuart Duncan, blogger

"How To Dance In Ohio reevaluates the definition of normal by emphasizing the universal need to belong, connect and grow, and by celebrating every individual's unique path. BroadwayWorld.com

"How to Dance in Ohio, a piercing documentary, might from its pocket description seem to be a variation on this evening-news staple. It's about teenagers and young adults in Columbus, Ohio, who are preparing for a spring formal dance. But Alexandra Shiva, the filmmaker, goes so much deeper than the corsage-and-boutonniere snapshot that the piece, though it too has feel-good moments, ultimately paints a portrait of young people whose futures are full of anxiety and uncertainty." - New York Times

"The camera mostly follows three risk averse, shy girls with varying degrees of verbal and social skills as they navigate all of the horrors of young adulthood...with the grace that comes with overcoming." - Gwen Ifill, Washington Week

"A touching, gentle-hearted look at teenagers on the autistic spectrum preparing for their first formal dance, How to Dance in Ohio offers a refreshingly upbeat, even cheerful look at people and their families coping with the condition...Its engagement with its subjects will help generate understanding and empathy among mainstream viewers, and that can only be a good thing." - Hollywood Reporter

"Filmmaker Alexandra Shiva focuses on three young women in Columbus, Ohio, who are living with autism and facing the daunting prospect of their first spring formal. The power and beauty of this closely observed, intimate documentary is that it doesn't patronize its subjects or its viewer with easy sentimentality." - peabodyawards.com