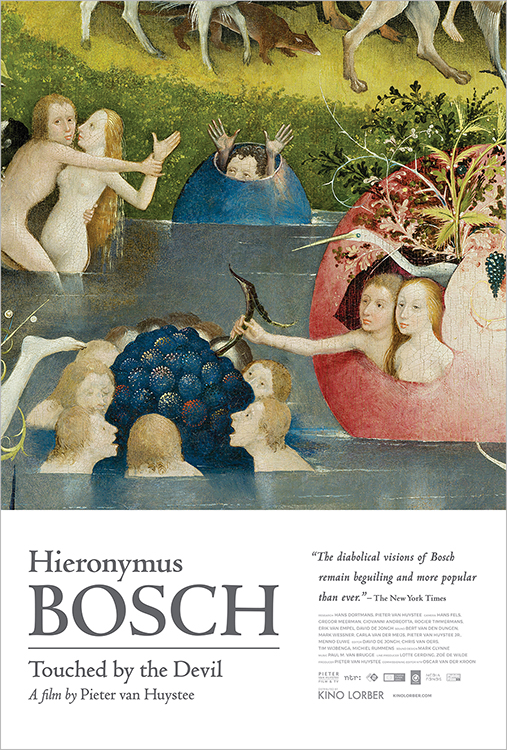 Hieronymus Bosch: Touched by the Devil

In 2016, the Noordbrabants Museum in the Dutch city of Den Bosch held a special exhibition devoted to the work of Hieronymus Bosch, who died 500 years ago. This late-medieval artist lived his entire life in the city, causing uproar with his fantastical and utterly unique paintings in which hell and the devil always played a prominent role. In preparation for the exhibition, a team of Dutch art historians crisscrosses the globe to unravel the secrets of his art. They use special infrared cameras to examine the sketches beneath the paint, in the hope of discovering more about the artist's intentions. They also attempt to establish which of the paintings can be attributed with certainty to Bosch himself, and which to his pupils or followers. The experts shuttle between Den Bosch, Madrid and Venice, cutting their way through the art world's tangle of red tape, in a battle against the obstacle of countless egos and conflicting interests. Not every museum is prepared to allow access to their precious art works.

“FASCINATING. Bosch’s images aresurreal, crazy, violent, sinister, astounding. They can make your eyes pop open in disturbed wonder. (The film) brings us literally closer to Bosch’s images than one could probably get in almost any museum… (it) offers a true immersion in his artistry.”
– Owen Gleiberman, Variety

“(Bosch’s) paintings, teeming with demons, creatures worthy of H.G. Wells’s ‘The Island of Dr. Moreau’ and surreal amalgams of all sorts, still strike awe… It’s a measure of Bosch’s imaginative genius that the imagery in works like The Garden of Earthly Delights outstrips in boldness many of the extreme digital fantasies in Hollywood horror films.”
– Stephen Holden, The New York Times

“An enthralling art detective story and a fascinating history lesson. There is not one boring moment in its 89 minute running time. There might not have been Dali or Geiger if it weren’t for Bosch. It’s a real delight to see his work up-close and personal, blown up on the big screen. Engrossing. A great watch.”
– Dustin Chang, Screen Anarchy

“The art museum is a multitudinous place of discovery in HIERONYMUS BOSCH: TOUCHED BY THE DEVIL. The doc is no mere appreciation piece, nor an advertisement for the sanctity or edifying calm of the museum space. Instead, it showcases the mechanism behind the exhibit that places curatorial efforts into fascinating light.”
– Clayton Dillard, Slant Magazine