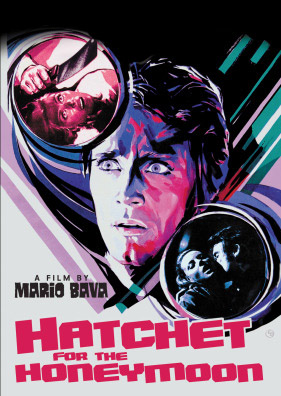 Hatchet for the Honeymoon

Seven years after innovating the grisly Italian genre known as giallo, Mario Bava returned to the form to create one of its deliriously frightening examples: HATCHET FOR THE HONEYMOON (Il rosso segno della follia).

Stephen Forsyth stars as John Harrington, the head of an affluent fashion house, who harbors an uncontrollable bloodlust for women in bridal veils. Only by murdering a succession of them, each in a grisly manner, can he delve deeper into his subconscious and bring to light the primal scene that spawned his very specific homicidal fetish.

With its director doubling as cinematographer, HATCHET is one of Bava's most visually sumptuous films. This Redemption edition has been newly mastered in HD from the 35mm negative, and is accompanied by an audio commentary by Video Watchdog founder Tim Lucas, commissioned especially for this release.