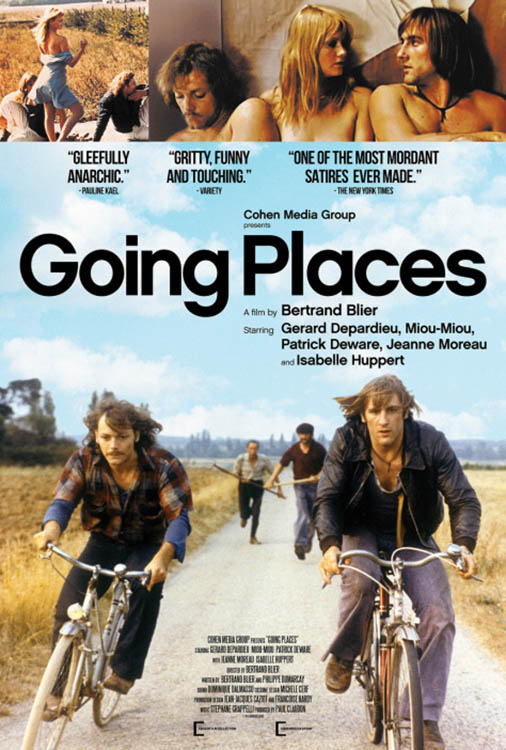 In this controversial and notorious buddy film, director Bertrand Blier (Get Out Your Handkerchiefs) created what critic Pauline Kael described as “an explosively funny erotic farce – both a celebration and a satire of men’s daydreams.” Gerard Depardieu (in the role that would make him an international star) and Patrick Dewaere portray Jean-Claude and Pierrot, two amoral drifters who travel the French countryside committing petty crimes and harassing the women they encounter, including Miou-Miou, Jeanne Moreau, and, in an early role, Isabelle Huppert. Perpetually on the run from the police and the women they encounter, the two are always just one step ahead of death or imprisonment as a result of their crime spree, but, as Kevin Thomas in the LA Times observes, ”Blier is interested more in Jean-Claude and Pierrot as sexual chauvinists than as petty criminals, and as they learn to become more considerate lovers they become more likable. Above all, they embody the sure-fire appeal of all movie anti-heroes, free-spirits who live entirely for the moment and at all times follow their impulses.” Graced with a justly famous score by Stéphane Grappelli, GOING PLACES remains as shocking and outrageous today as it did upon its initial release.

"A crazy, wacky, often actually slapstick, and very risqué sex comedy that nonchalantly backs its way into the light of sweetness and simple human kindness without even considering compromising its anarchic, rebellious edge, Bertrand Blier's Going Places is a real gem of a movie that Kino has now polished up to look its very best for this Blu-ray release. And none too soon; this one is ripe for rediscovery by a new generation of home-theater cinephiles as a too seldom-invoked classic of post-New Wave French cinema. Highly Recommended. - DVD Talk