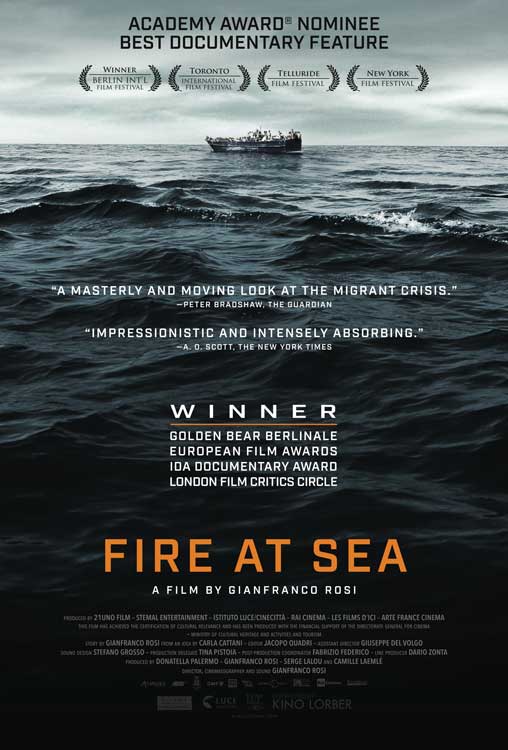 An Academy Award® nominee for Best Documentary Feature and the first nonfiction film to ever win the top prize at the Berlin International Film Festival, FIRE AT SEA takes place in Lampedusa, a remote Mediterranean island that has become a major entry point for refugees into Europe. There, we meet Samuele, a 12-year-old boy who lives simply, climbing rocks by the shore and playing with his slingshot. Nearby, we bear witness as thousands of men, women, and children risk their lives to make the brutal crossing from Africa. Award-winning filmmaker Gianfranco Rosi masterfully juxtaposes these realities, jolting the audience into a new understanding of what is happening in the region, the heavy toll of the migrant crisis, and the price of freedom.

"Five Stars – A masterly and moving look at the migrant crisis."

"Deliberate storytelling that allows us to consider what documentary can do. It is urgent, imaginative and necessary filmmaking."

"Five Stars – Fire at Sea is a masterpiece not only of documentary filmmaking but of timely and abiding storytelling. The filmmaker/cinematographer is a master of light, bathing each image with meaning."

"Where journalism leaves off, Fire at Sea begins. It takes a unique documentary filmmaker like Gianfranco Rosi to capture the drama through the periscope of his camera focused on the small Sicilian island of Lampedusa."